Nothing like a nasty chest cold to remind me to dial back. February has been nuts with writerly stuff, and it's the most hectic month (along with October) for the day job.

So, see you in March. Meanwhile, I have a date with a tissue box...
Posted by Karen McCoy at 12:32 PM No comments:

I met Regency romance author Donna Hatch at a recent conference, and read the first book in her Rogue Hearts series, A STRANGER SHE MARRIED. The latest is A PERFECT SECRET, available now on Amazon. 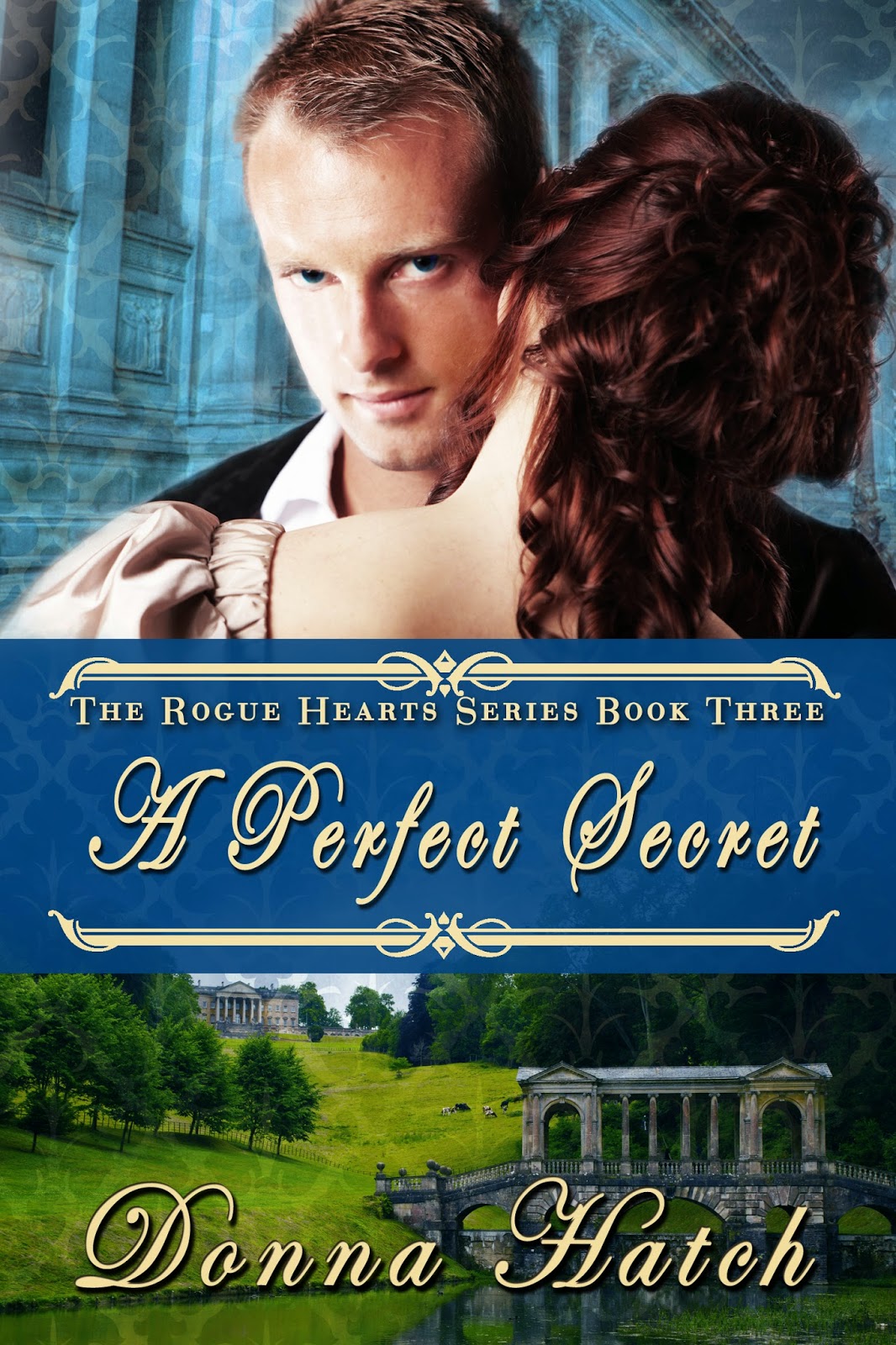 Desperate to protect her father from trial and death, Genevieve breaks off her engagement with Christian Amesbury and marries a blackmailer. After a year of marriage, she flees her husband's violent domination only to have fate bring her back to Christian. Just when she thinks she's started a new life of safety and solitude, her husband tracks her down, stalks her, and threatens everyone she loves.

Still brokenhearted over Genevieve's betrayal a year ago, Christian can't believe she's come back into his life--and worse, that she's done it on the anniversary of his brother's death, a death that haunts him. Though tempted to throw her back into the river where he found her, he can't leave her at the mercy of the terrifying man she married.

When her husband torments Genevieve and puts his family in danger, Christian will do anything to protect those he loves...anything except give Genevieve another chance to break his heart.

Here's Donna's answers to some questions:

What drew you to Regency era romance, and can you tell us more about your journey toward becoming a writer?

I have always loved historicals from Medieval to Victorian, but I never developed a passion for Regency until I researched it. I had the story in my head, and loosely rough drafted on paper, but didn't know in what era to set it. So I started reading overviews of each era, looking at pictures of the clothing styles, learning about social customs, etc. I also examined niche markets. As it turns out, Regency is a strong niche market, meaning it has a large group of followers who love it— probably the majority of them are Jane Austen fans. So from a sales standpoint, Regency made sense. This probably sounds really calculated and rather mercenary, but if I were to go to all the trouble to research and write a book, it should stand a good chance of selling a few copies, don’t you think? The more I researched Regency, the more I fell in love with the era. Now I'm a certified Regency nerd and I love it, love it, love it.

I think Recency is the perfect setting! And I love the premise for THE STRANGER SHE MARRIED. Where did the idea come from, and what do you want readers to take away when they're finished reading?

I like to think about secondary characters and wonder what their story might be. I also like to do the ‘what ifs.’ What if the Phantom of the Opera weren’t a killer; what if he were just misunderstood? That kind of thing. The story sort of evolved from that, only there are no phantoms or operas. I also love the whole Beauty and the Beast theme—I love the idea of a man who was more than he seemed, and that it takes a woman of substance to see that.

I hope readers will take away a hope a determination to look for the good in others and to assume everyone is of worth. I also hope readers take away from all my books a hope of a happily ever after.

I definitely got that feeling when I read it. The newest book in the Rogue Hearts series is A PERFECT SECRET. How has the series developed since the first book, and what advice (if any) do you have for writing a series?

The series developed when I mentioned to my editor during the editing stage of THE STRANGER SHE MARRIED that I was working on a book two for his brother, Jared, who had really piqued my interest in The Stranger She Married. This book was later published with the title, THE GUISE OF A GENTLEMAN. My editor and I developed a series idea that involved more siblings in the family and a few ideas of how to work them into the books in the series.

My advice to anyone considering writing a series is to have the characters really well developed and the premises of each book fairly well plotted  BEFORE the first book is published. Jared’s story flowed really well, but Christian’s was harder because I would have portrayed him a little differently in the first two books had I known what his story would be and I felt stifled when I wrote his story trying to fit him into already established parameters. At one point in his book, he said he felt as if he were living someone else’s story. Which is probably true. He was probably meant to have a different story but once he (and I) accepted that sometimes life (or plots) doesn’t go according to what we perceive they’re supposed to, his story took shape.

Excellent tips! What are some of your current projects?

I am doing revisions for book one of a new Regency series. I’m also editing a YA futuristic novel. Yeah, big leap out of my normal genre, but the story haunted me until I wrote it. And I’m plotting book 4 of the Rogue Hearts series, which will be Grant’s story.

Thanks, Donna! To get your hands on the Rogue Hearts series, click the links below: