THE NIGHT BEAT, by Gini Koch ~ BLOG TOUR and GIVEAWAY!

The wonderful Gini Koch (known for her Alien series ) has an intriguing new series, Necropolis Enforcement Files, debuting with THE NIGHT BEAT. To enter to win a free e-book copy of this fabulous new book, answer the following question in the comments section: How would you enforce Prosaic City's night beat?  I'll pick my favorite answer and announce the winner next week.

Take it away, Gini!

Thanks for stopping by on the Necropolis Enforcement Blog Tour of
2012! If you haven't read the first chapter of The Night Beat, hit
Deathless Prose over at my website
(http://www.ginikoch.com/deathlessprose.htm) and check it out. Then,
hit each stop along the way to get more of the story. Missed a stop?
Check the website for the Tour Page
http://www.ginikoch.com/blogtour.htm and get caught up.
And don't forget to get entered to win a copy of The Night Beat at
EVERY blog tour stop along the way! Plus, follow the Tour 'til the end
and get entered for a mega-prize! So, grab your badge -- it's time to
join Necropolis Enforcement! 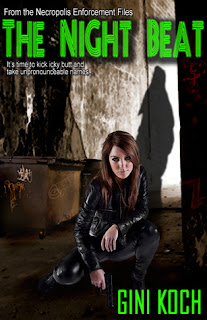 The majority of Prosaic City's residents don't know that their town exists on top of another place -- Necropolis, City of the Undead. For the most part, the two planes of existence manage to remain separate. And when they don't, Necropolis Enforcement has beings in place to ensure the general human population remains blithely clueless.

Victoria's comfortable working the shift where all the weird comes out to play, especially since her partner is also her perfect man.Or would be, if Victoria could ever work up the nerve to tell him she isn't like other girls.

It's hard enough being a werewolf in disguise, but when a creature
from the Depths of Hell shows up in an alley preferred by junkies,
bums, and hookers, it's going to take more than just Victoria's
special gun and werewolf skills to subdue the ancient Sumerian demon.

Especially when the demon is merely the start of what appears to be a
major takeover attempt by the Prince of Darkness.

Soon all of Necropolis Enforcement's Undead Brigade is involved in the
fight to stop the Prince's Major Minions from taking over Prosaic City
and the rest of the human plane. But it's Victoria who has to face the
Adversary and figure out what intricate plan Lucifer has up his wings
before everyone she cares about is destroyed.

In other words, it's just another day on the Night Beat.


Excerpt:
Prosaic City was one of the country's older inhabited burgs. In the
course of its existence it's been rebuilt several times. Because it was built
on top of Necropolis. Which was a bad move by the old-time Prosaic City
Planning Council, but everyone makes mistakes, right? Just because no
one else had settled on the pretty spot next to the water didn't mean
anything, they reasoned, they'd just gotten there first.
Actually, they'd gotten there last.
There are points in the world where the occult pull is particularly
strong.Where the ley lines, longitude, latitude, winds, weather, and general
force of both nature and the occult combine with placement in the cosmos and
an entity is formed that shouldn't be able to exist in reality.
I've heard them called hell mouths, portals, doorways, entryways, and a
variety of other terms. But those aren't really accurate.
What forms isn't a door. What forms is a city. A city that exists both
in this plane of reality and all the others at the same time. A place that
wasn't built but can never be removed, a power created by everything and
nothing at the same time, something that wasn't born but can never die.
What my kind call an Undead City.
In the American hemisphere, that city is Necropolis.
Necropolis was here first, but most of its residents immigrated over
time.
The pull from an Undead City is strong. The power in one is even
stronger.
Prosaic City was built right on top of Necropolis. This made things hard
for the Necropolites and weird for the Prosaics. Due to the way an Undead
City worked, the humans could and did put their buildings and roads and such
on top of things of ours that were already there. So, City Hall and the
city courthouse was right on top of what was considered Necropolis'
Red Light District, which, as the Count said, made poetic sense.
All the undead can see into at least two planes of existence, and most
can see into more. Vampires and liches can see almost as many planes as a
god.
Werewolves aren't quite as powerful magically, so we have limits. Which
was okay with me. I had enough fun keeping Necropolis separated from Prosaic
City on a nightly basis.
Not that I wasn't good at it. I was considered one of the best, if not
the best, at cross-existence. But it had taken me years to hone the skill to
perfection, and that much focus on one skill meant others weren't quite
as sharp. Then again, I never found not being able to look into one of the
levels of Hell without trying to be a hardship. I didn't care for Hell
and never wanted to go there. That I had reasons to go there made it worse.
We call moving back and forth between the human and undead planes
sliding.
Everyone has to learn it, it's not natural to any being. Some humans did
it as easily as undeads. They were usually mentally unstable -- not before
the slide, but after. It's hard for a human to see myths and legends and
worse in real life and know it's real. Most minds can't take it if they aren't
prepared.
However, the younger, the better. That's the main reason changelings
exist.Not to steal babies but to save them. Children who can see the undead
normally have a lifetime of pain and torment ahead of them, unless we
get them first.
Undeads, by our nature, don't have the same issues. We know the human
plane exists -- at least two-thirds of us were human before we undied. But
seeing the human world superimposed over the undead one was always good for a
headache if your concentration faltered.

Gini Koch lives in Hell's Orientation Area (aka Phoenix, AZ), works her butt
off (sadly, not literally) by day, and writes by night with the rest of
the beautiful people. She writes the fast, fresh and funny Alien/Katherine
"Kitty" Katt series for DAW Books, the Necropolis Enforcement Files
series,and the Martian Alliance Chronicles series for Musa Publishing. As G.J.
Koch she writes the Alexander Outland series for Night Shade Books. She also
writes under a variety of other pen names (including Anita Ensal, Jemma
Chase, A.E. Stanton, and J.C. Koch), listens to rock music 24/7, and is
a proud comics geek-girl willing to discuss at any time why Wolverine is
the best superhero ever (even if Deadpool does get all the best lines). She
speaks frequently on what it takes to become a successful author and
otheraspects of writing and the publishing business. She can be reached
through her website at www.ginikoch.com


So--how would you enforce Prosaic City's night beat? Leave your answer in the comments section below to enter to win a free e-book copy of THE NIGHT BEAT!

Posted by The Writer Librarian at 2:45 PM

I don't know that I would be any good at protecting either world. I would probably run screaming into the night if something nasty came 'sliding' over to my side. Unless he was incredibly hot, then I might run screaming at him...haha.

Don't know if I would be able to juggle both , but if I did I would be very tired and get lack of sleep am pretty sure people would think am crazy. Hopefully I'll have a kick ass team to help me out. :)
neoterragoddess@gmail.com

I'm sure I'd have days where I couldn't get out of bed. :P but other days where I'd just suck it up and try not to make people think I was crazy.....

I have no idea but some how I would get it done!
vsloboda(at)gmail(dot)com

With all the weapons I could carry.
scrtsbpal at yahoo dot com

With a whole lot of snark and helpful friends on speed dial. In addition to a smart partner (any species) and weapons :)

Me? Ha ha. Everyone would be so screwed. I can't get my kids to listen to me why would anyone else.

I have my copy already, but following through with the tour. :) Thanks for sharing!