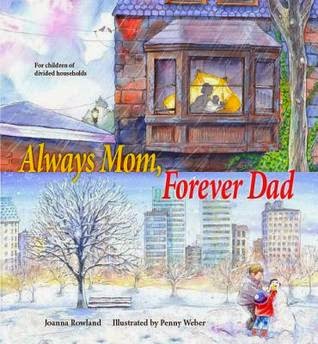 In today's world, more and more children have parents who live separately. As these children move between homes, they can't help but wonder: will mom still love me? Will Dad? In this reassuring picture book, young readers see children who have two households,whether because of divorce, separation, or other circumstances, experiencing life's ups and downs with both parents, secure in the knowledge that Mom will always be Mom, and Dad is forever Dad.


Here are Joanna's answers to some questions:

On your Twitter profile, it says you're represented by Danielle Smith. How did you and Danielle find one another, and can you tell us more about your journey toward publication?

Danielle Smith is such an amazing agent. She really is the perfect fit for me. I met her through Twitter. Twitter has been an amazing part of my growth as a writer. I’ve gotten great links to blogs by authors, agents, editors and I learned about SCWBI. I love the hashtag #tenqueries. It gives you a
window into an agent’s mind for when they pass or accept a query. One night agent Pam Van Hylckama Vleig was doing a #tenqueries and one of the passes was on a divorced picture book. She had liked the concept but something didn’t fit. My first thought was She reads picture books! My second thought was She might like mine if I send it. So I did what any sane writer would do and sent it ten minutes later. It was right before she was opening a new agency and Danielle was going to be an agent there. I had no clue all this was going on. I believe Pam gave her my manuscript and a few days later Danielle started following me on Twitter. I think it was the first time an agent followed me. I may have been a little excited. To make a long story short, she called to offer representation a few weeks later and I became her first client.

My journey to publication has been a great one. It actually wasn’t until 2009 that I knew I was going to become a writer. It was after my school district provided Writers Workshop training during a week
over the summer. I felt inspired and something clicked, so I tried writing YAs and PBs. I used to be really eager and send things out too early that I probably shouldn’t have. But the form rejections just
made me stronger. I’m so grateful I got them because it caused me to dig deeper and try harder. I also met some amazing writer friends along the way. I really think of them as my mentors. They were full of great advice. I think between them and starting to go to SCWBI writing conferences is where I made the most growth. In December of 2012 when the school shooting happened, I had
to put away a dark YA I was working on. That’s when my writing shifted. It made me think about what type of words I wanted to contribute to the world because words do have power and can
make a difference. I wanted to write something that would have a positive impact.

When I wrote ALWAYS MOM, FOREVER DAD I thought this could be the one. Tilbury Publishing House bought my book in July of 2013. That was just a few months after signing with Danielle. They had a beautiful vision for the illustrations. I originally wrote the book through the eyes of one child in first-person POV. Tilbury wanted to show many families throughout and Danielle and I loved the idea. I was thrilled when Penny Weber was announced as my illustrator and I love what she did with the pictures and the cover! I loved how the cover is split in two. It makes perfect sense with this book.

It really does. The premise is fantastic, and I love the idea of many families instead of just one. Where did the idea come from, and what do you want readers to take away after they read it?

When my now 14-year-old was 3, I was a single mom. She still saw her dad. That was the first time I attempted writing a two home book. Talk about shelving a book for awhile! But I wrote it wrong. Writing a book that resembles a child’s life too much is not necessarily the best thing. So I let it sit and didn’t really pursue the writing dream for years.

A little over three years after trying to write other books is when my writing changed. Two weeks after that shift I went to a family gathering at Christmas. I was talking about writing and one relative said, “I wish there were more positive books about divorce.” I told her I’d write her one. At a family
cabin about one week later, the ideas poured. There are so many positive intact family books. I wanted a positive two home book for my children and students. As a teacher we use mentor texts for our class when teaching Writers Workshop. I really liked the simple flow When I Was Little by Jamie Lee Curtis. I liked that it was in a predictable pattern and I thought “What if a two home book flowed that way?” Then I started brainstorming how could things look different at dad’s and mom’s house from morning to night with the underlying message that love never changes. I had a student whose dad lived in another state, so the different weather scenes are for him. My step-daughter and daughter
used to bring their blankets from house to house so I wanted to acknowledge that children experience that as well. The real reason I wrote ALWAYS MOM, FOREVER DAD is so children wouldn’t doubt they are loved.

What a beautiful theme--and I'm interested to know more about how your writing shifted! You mentioned that you're a full-time schoolteacher. How do you balance writing with day-job tasks, and what strategies have worked for you so far?

I almost laughed when I read “balance.” I feel so unbalanced a lot of the time. Balance is the dream. It’s hard juggling motherhood, and teaching since I’ve switched schools and grades pretty much every year the last five years. So I’m not sure that I’ve found the perfect answer. All I know if I have to cut something out of my life to find balance, it won’t be family or writing, because those are priorities.

I do send myself away for a weekend once a year just to focus on writing. I tend to be productive because if I leave my family and spend money there’s no way I can come back empty-handed. I’ve tried writing before everyone’s up and when they go to sleep. Mornings are best, but sometimes I hit snooze. ;) A nice perk of being a teacher is breaks to write so I’m really excited for this summer. One strategy that helps me is a notebook to write down my thoughts and brainstorm for a project. There is something magical about paper and a pen. I wrote ALWAYS MOM, FOREVER DAD first in one. And going to SCWBI conferences I always pick up at least one piece of advice that will help me become a stronger writer.

I know what you mean about that snooze button! What are some of your current projects?

I’ve completed a fall picture book that could have the potential for spinoffs for the other seasons. I have a couple of other picture books I’m polishing up. Topics range from food, death, animals, etc. I’m also writing an MG that requires history research. My older girls want me to finish a YA ghost story they’ve read the beginning chapters to. Novels take longer as a working mom so I’m hopeful this summer will be fruitful.

To grab a copy of ALWAYS MOM, FOREVER DAD, click the link below:

I have seen and read this book. It is a wonderful answer for explaining divorce as being ok for a child to children. I am thrilled that this dream book now exists.

Excellent! I'll pass this along to Joanna if she hasn't seen it already.