THE WHATNOT, by Stefan Bachmann

Back in 2012, I interviewed Stefan Bachmann about his debut novel, THE PECULIAR. I'm happy to report that the sequel, THE WHATNOT, just came out in paperback. Have a look: 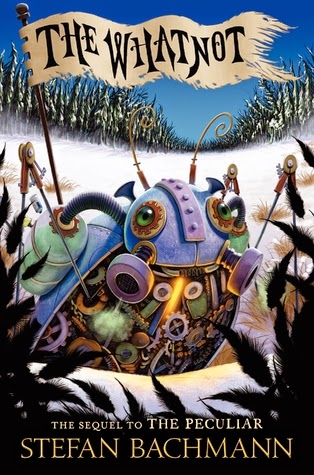 Pikey Thomas doesn’t know how or why he can see the changeling girl. But there she is. Not in the cold, muddy London neighborhood where Pikey lives. Instead, she’s walking through the trees and snow of the enchanted Old Country or, later, racing through an opulent hall. She’s pale and small, and she has branches growing out of her head. Her name is Henrietta Kettle.

The faeries—save for a mysterious sylph and a mischievous cobble faery or two— have been chased out of London. They’ve all gone north. The army is heading north, too. So Pikey and Bartholomew follow, collecting information, piecing together clues, searching for the doorway that will lead them to Hettie.

Here are Stefan's answers to some updated interview questions!

In our last interview, you were drafting the companion to THE PECULIAR, now available as THE WHATNOT. How has THE WHATNOT expanded on the world you've built?

It's basically twice the size. The world, not the page-count. The first book was set only in the steampunk-y, magic-infused England, and the second one is only partly there, and partly in the mysterious faery world, which I loved writing. I could go a little bit crazy. No rules. Curtained windows for eyes. Clocks that tell the mood of the house-mistress, instead of the time. It was fun.

Sounds amazing! Pikey Thomas is different from THE PECULIAR's protagonist, Bartholomew Kettle. Did Pikey come to you fully fleshed, or did you discover him as you wrote?

Characters are definitely the hardest for me to write, and in this book the characters (mostly Pikey and Bartholomew) came really slowly throughout the revision process. Pikey's pretty simple in some ways. He's a hardscrabble orphan who lives in constant peril after having one of his eyes tampered with by a faery, and under his rough exterior he's longing for a home and other people. I knew all that about him when I started the book, but sometimes my brain knows things and doesn't bother telling me, and so it can take ages for me to be able to consciously express them and bring it out in the book.

I'm the same way--some characters come fully formed, others are tougher to crack.
You contributed a short story to THE CABINET OF CURIOSITIES: 36 TALES BRIEF & SINISTER. What do you enjoy most about writing short stories?

We each contributed 8 short stories! Cabinet of Curiosities (http://enterthecabinet.com) is a fun side project that I do together with three author friends where we post an odd/creepy/whatever-we-want short story every week. We were not expecting it to be turned into a book at all, and I think what I love most about the project is just being able to get away from whatever longer thing I'm working on and write whatever comes to mind. I also think it's great practice for me. I've learned a ton about writing in general from doing these short stories.

Sounds like a great way to learn! Thanks, Stefan, for another excellent interview.

To grab THE PECULIAR and THE WHATNOT for yourself, click the links below: