THE GIRL WHO COULD NOT DREAM by Sarah Beth Durst

The moment this book passed my desk, I knew I had to feature it. It's a wonderful middle grade fantasy romp that goes beyond the usual tropes of dream catching. Sarah Beth Durst also writes in multiple genres, which brings a lot of richness and complexity to this story: 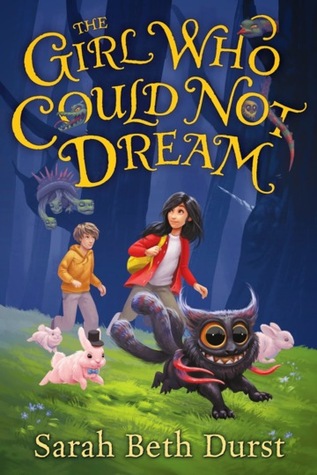 Sophie loves the hidden shop below her parents' bookstore, where dreams are secretly bought and sold. When the dream shop is robbed and her parents go missing, Sophie must unravel the truth to save them. Together with her best friend—a wisecracking and fanatically loyal monster named Monster—she must decide whom to trust with her family’s carefully guarded secrets. Who will help them, and who will betray them?

Sarah was also kind enough to answer some interview questions:

In an interview with YA Interrobang, you mentioned that Star Wars was the "definition of Story." What defines story for you and why? And were you among the legions seeing The Force Awakens?


I love Star Wars.  Always have.  We taped episode IV off the TV when I was a kid, and I remember the VHS tape flickered between color and black & white with some static fuzz every so often, yet I still watched it over and over again.  For me, Star Wars is the quintessential Story-with-a-capital-S.  It ticks all the boxes: wonder, adventure, humor, excitement, romance, and lightsabers; it has characters I love; and it has an immensely satisfying structure.  Perhaps it's because I encountered it at such a formative age, but it is my defining fairy tale.

Absolutely saw The Force Awakens, and absolutely loved every single frame.  It captures the same feel of episode IV: fun and funny and stirring and mythic.  I love that a new generation is going to grow up with Star Wars imprinted on their souls.

After I finish the next draft of my current novel, I'm going to reward myself by seeing it again...

I think I need to see it again too, to fully appreciate it. And good luck with the next draft!
THE GIRL WHO COULD NOT DREAM received starred reviews in School Library Journal and Kirkus. Congratulations! What do you think gives the book such broad appeal among readers?

Thanks so much!!  I loved writing this book, and I'm so excited to share it with people!

So true. And beautiful things happen when writing comes from the heart. You write for all age groups--children, teen, and adult. What is your favorite part of writing for each demographic, and why?

I love writing fantasy -- that's where my heart is.  Sometimes the stories I think of feature a kid, sometimes a teen, and sometimes an adult, and I love writing all of them.  So long as there's a monster or a talking polar bear or something impossible in it, I'm happy.  But I have discovered that there's a different kind of joy to be found in writing each kind of book.

When you write for kids, you're dealing with a lot of firsts.  First adventure.  First taste of independence.  First real responsibility.  First monster.  And that forces you, as a writer, to see the world through these fresh eyes.

In THE GIRL WHO COULD NOT DREAM, Sophie's family is hiding an enormous secret: they run a dream shop, hidden beneath the family's bookshop, where they buy, bottle, and sell dreams.  Because she's been hiding this secret, Sophie hasn't been able to make many friends.  Except, of course, for a loyal and cupcake-loving monster named Monster.  So this book is about her first friendships, her first adventure, and her first taste of danger.

In writing for adults, you're not dealing with firsts either for the character or the reader, and that's fun too because you can play with and subvert reader expectation.  You can draw on the huge body of literature and deep-rooted cultural references that came before.  For example, right now I am working on an epic fantasy trilogy entitled THE QUEENS OF RENTHIA.  (The first book, THE QUEEN OF BLOOD, will be out from Harper Voyager this fall, September 2016.)  It's about a world filled with nature spirits.  But they're not the sweet, frolicking nature spirits from a pastoral tale.  These spirits want to kill all humans.  I had so much fun subverting the concept of a nature spirit and literally pitting humans against nature.

For YA, you're typically writing about a moment of tremendous change.  This is the time when personalities are really formed and solidified, and it's great fun to take your characters and bend, twist, and break them so that they can come out stronger.

I feel very lucky to be writing in all of these age groups.

And I love the poignancy you bring to all of them! If you could bottle up your own dream to sell, what would it be and why?

My books are my dreams.  (Okay, not literally -- I've only had one book that was born in a dream, and that was VESSEL.  It began with a girl dancing in the sand, knowing at the end of the dance that she was going to die and welcoming that death.  I woke up worrying about that girl.)  But I think of books as shared dreams -- shared between the writer and reader -- and by reading a book, you're drinking a bottled dream.

What a beautiful way of putting it! Thanks Sarah, for such a great interview! 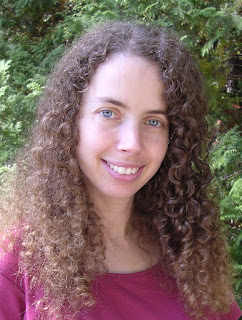 Sarah Beth Durst is the author of ten fantasy novels for children, teens, and adults, including Conjured, Vessel, and Ice. Her latest middle grade novel, The Girl Who Could Not Dream, came out in November 2015 from HMH/Clarion Books, and her next novel for adults, The Queen of Blood, comes out in fall 2016 from Harper Voyager. Sarah was awarded the Mythopoeic Fantasy Award for Children's Literature and has been a finalist for SFWA's Andre Norton Award three times. Sarah was born in Northboro, Massachusetts, a small town that later became the setting for her debut novel. At the age of ten, she decided she wanted to be a writer. (Before that, she wanted to be Wonder Woman, except with real flying ability instead of an invisible jet. She also would have accepted a career as a unicorn princess.) And she began writing fantasy stories. She attended Princeton University, where she spent four years studying English, writing about dragons, and wondering what the campus gargoyles would say if they could talk. Sarah lives in Stony Brook, New York, with her husband, her children, and her ill-mannered cat.

To get THE GIRL WHO COULD NOT DREAM for yourself, feel free to click the links below: