MY KIND OF CRAZY by Robin Reul

My Kind of Crazy intrigued me when it first crossed my desk as an ARC. I mean, what's more epic than a failed sparklers "promposal" attempt that goes aflame? 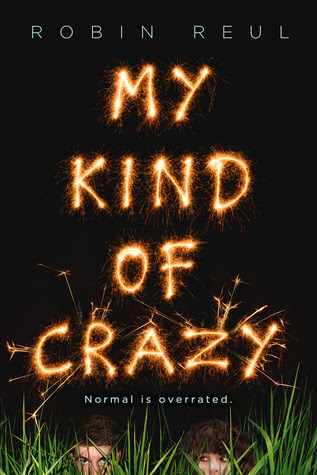 Hank Kirby can't catch a break. He doesn't mean to screw up. It just happens. Case in point: his attempt to ask out the girl he likes literally goes up in flames when he spelled "prom" in sparklers on Amanda Carlisle's lawn...and nearly burns down her house, without ever asking her the big question.

Hank just wants to pretend the incident never happened. And he might've gotten away with it-except there is a witness.

Peyton Breedlove, brooding loner and budding pyromaniac, saw the whole thing, and she blackmails Hank into an unusual friendship. Sure, Hank may be headed for his biggest disaster yet, but it's only when life falls apart that you can start piecing it back together.

According to your website bio, you have a background in film. Can you tell us more about this experience and in what ways, if any, it influenced your writing journey?

My father was a film producer and I grew up on movie sets. It was only natural that led to studying film in college and ultimately working for several years in film production and development. As a result, I read a lot of screenplays and learned a lot about what makes for good story, pacing and dialogue. It had a huge impact on the visual quality I try and bring to my writing. I would honestly say that my writing is far more influenced by films I loved even moreso than books. Every scene plays out like a movie in my head as I’m creating it. My writing tends to be very character and dialogue driven, which also reflects the types of movies and books I tend to enjoy the most as well.

I'm the same way, and your writing definitely sucked me in from the beginning. I love the cover of MY KIND OF CRAZY, especially how it relates to the plot. Did the story come fully formed, or did it develop as you wrote it?

This story completely developed as I wrote it. In fact, when I sat down to write the book, I really only had the opening scene and the vaguest idea of where I wanted Hank to be by the end of the story. I knew the characters I wanted to create, but hadn’t fully sewn together how their lives all needed to intersect and how their stories would change if they didn’t. For example, there was a day when I was finishing a scene that was to be followed by one where Hank has to do something big. I ended the chapter by writing “And then I came up with a plan so crazy it just might work.” I had absolutely no idea what that plan might be, and left it for the me of the following day to figure out. That turned out to be one of my favorite scenes in the novel, and part of the fun of it was having the story unfold for me at the same time as the reader.

Further proof that the best ideas come when we least expect them! If there were five books you could take to a desert island with you, what would they be and why?

1. Gone With The Wind by Margaret Mitchell because Scarlett O’Hara is the original Katniss and she taught me that tomorrow is another day.
2. All The Bright Places by Jennifer Niven - because sometimes a book comes along that speaks to you on a soul level and reading it again is like being able to revisit a friend.
3. The Spectacular Now by Tim Tharp - because I could read that book a hundred times and never stop wishing I wrote it because it’s such perfection
4. She’s Come Undone by Wally Lamb - the first book that made me reach the last page and have to sit with it and savor it for a good hour after I’d finished with such deep admiration for the writing.
5. Walter The Lazy Mouse by Cindy Szekeres and Marjorie Flack - one of my absolute favorite books as a child. I have fond memories of reading it with my mother over and over, and I still have my tattered copy on my shelf today.

All the Bright Places is still on my TBR list, and I love your comparisons between Scarlett O'Hara and Katniss. Thanks so much for such great answers!