HEART OF THE GOBLIN KING by Lisa Manifold

I had the fortune of meeting Lisa Manifold at this year's UTOPiAcon. I was immediately intrigued by  HEART OF THE GOBLIN KING, the first in her The Realm Trilogy series, especially the large cardboard cut-out of The Goblin King by her booth! See below for more: 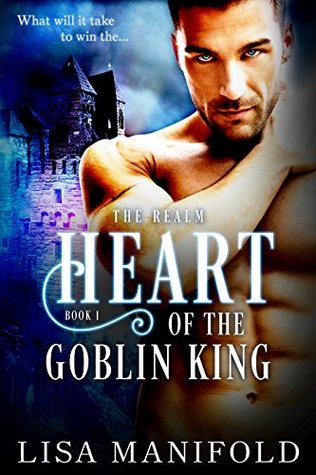 Brennan,the King of the Goblin Realm finds himself facing his greatest challenge he's faced since he came to the throne. A rogue sorcerer is raising an army of Brennan's own subjects against him threatening the peace Brennan has worked so hard to create for his people. Since he's already engaged to a perfectly suitable lady, there's no room or need for love in his life. Which is a good thing, because he has other things to worry about. Love is the farthest thing from his mind.

Iris never expected to be whisked away to the Goblin Realm from a stadium bathroom. All she wants is to get away from the obviously crazy man with the sword. Iris has her own problems and being trapped in a land she still can't believe isn't helping any of them. Her goal is to get back to her family and her potential new boyfriend.

Though Brennan and Iris try to ignore the attraction between them, when they must make a choice will they continue to deny their feelings or will they take the step that will change their lives and the lives of everyone around them?

I'm interested your offended cat. What offends the cat most?

EVERYTHING offends Ms. Lolly. She likes to be around you, almost, but not quite, underfoot. Should you dare to move, she meows at you in what sounds like a complaint. If you pass her going through the house, and it's too close for her liking, ComplaintMeow. If the dogs look twice at her, ComplaintMeow. She is always, always annoyed. She follows me through the house, and if I am walking back and forth, she doesn't care for it. She does like to sit up above you--on the back of the chair or couch, and nuzzle your head. But if you pet her too much. she scoots away, ComplaintMeowing all the while.

I love her to pieces, but she is very unwilling to suffer in any fashion, and everyone in the house, even me, offends her sense of space and self. It's funny, I'm her person, but there are limits for me just like everyone else. I do think my limits with her are not as hard and fast as others, but they are there.

Sounds like the limits are relative to her anyway. And you didn't limit this story either! I love how Brennan's and Iris's story is told from dual points-of-view. What about their interplay was most challenging to write?

Keeping their voices separate. When I would switch from one to the other, I'd have to take the time to get in the head space of the one on stage. I developed a distinct point-of-view for both of them, and had to make sure I was there when I wrote it. As well, I found myself telling Brennan to get over himself, and take the stick out of his....you get the point! He's much more formal than Iris - all the fae are. Iris is pretty comfortable in her own skin, and she likes who she is, so she's not changing for anyone, not even him.

In the end, they both change. They take on aspects of one another, as most couples do when they commit to each other. But her ease and his formality are two of the aspects they love about one another, because they are so different. It's appealing to be with someone who is not like you. Maintaining their differences has been the most challenging aspect. I never want them to sound the same on the page.

He is also stiff in the literal sense--his cardboard cut-out was epic! What sparked the idea for this, and was it expensive to make?

I'm going to blame this on my author friend Lisa Brown Roberts. I saw some of the pictures she posted from the RT Booklover's Convention this year. A couple of them had her posing in cutouts of the 1980's book covers - the ones with women wearing ripped bodices, and lifted skirts, and the men looking like Fabio. I'm a complete nerd, so when I saw that, I thought, What a great idea! I would totally pose with that.

And the idea for the cut out of Brennan and Iris was born. It was about $175.00, because I decided to get the more durable cut-out. Brennan has to be able to travel, and make it through checked luggage! He did, too, along with a lot of bubble wrap. I took him through security on one leg, and the TSA folks had fun cutting open my package. BUT - they were fabulous, because they helped me tape him back up. He's one of the best marketing ideas I've done so far.

Excellent! What are some of your current projects?

Right now, I'm finishing up a short story for my newsletter, and working on Book 2 for both The Realm Trilogy, and the Heart of the Djinn series. Those will be out in the fall, and then I need to get right to work on both of the third books. I have a stand alone I am trying to schedule for around Thanksgiving, and then I have plans for new series after that. I am pretty ambitious with my schedule, but things get in the way. So I give myself a little slack. But not much! I love these books, and am anxious to get them done!

Thanks for the questions! These were great! And thank you, Lisa, for your great answers!

To grab a hold of the Goblin King for yourself (you know you want to!), links are below:

I'll bet he was, Lisa! And thanks for commenting! It's always good to see a familiar face. :)