THE BOOK OF BART by Ryan Hill

I met Ryan Hill at UtopiaCon this year, and when I found out about the BOOK OF BART, I knew I had to feature it. Have a look: 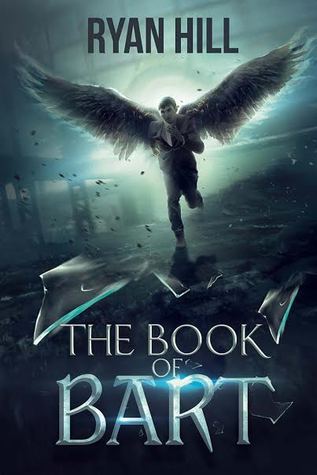 Working for the man upstairs stinks, but working with Samantha, an angel in training? Offensive!

Only one thing is so powerful, so dangerous that Heaven and Hell must work together to find it: the Shard of Gabriel.

With a mysterious Black Cloud of Death hot on the shard’s trail, a desperate Heaven enlists the help of Bartholomew, a demon who knows more about the shard than almost anyone. Six years ago, he had it in his hands. If only he’d used it before his coup to overthrow the Devil failed. Now, he’s been sprung from his eternal punishment to help Samantha, an angel in training, recover the shard before the Black Cloud of Death finds it.

If Bart wants to succeed, he’ll have to fight the temptation to betray Samantha and the allure of the shard. After an existence full of evil, the only way Bart can get right with Hell is to be good.

Your writing puts me in mind of Terry Pratchett and Christopher Moore. Which authors would you say are your biggest influences and why?

Christopher Moore is probably my biggest influence. If he's the gold standard of paranormal humor, I'd be more than happy being the black sheep of the genre, the one everyone eyeballs sideways at Thanksgiving dinner, wondering how long it'd been since I was last arrested. Douglas Adams, too. Hitchhiker's Guide to the Galaxy is an all-time classic.

I love how your book grapples with the nuances of good and evil. What would Bart say if someone referred to him as being good?

My initial gut reaction says he'd do a spit take. In your face. One of those classic ones that leaves you dripping. Then, he'd laugh for a good five, ten minutes, after which he'd want to say some really awful things but the giggle fits would be too much for him to handle. Eventually, either you'd bore of his condescension and walk away, or he'd get himself under control just long enough to say, "No. No I'm not." After which, he'd burst into another giggle fit, one that would probably leave him on the ground convulsing in laughter, ruined suit be blessed.

Nice! On your website, you mention that some of your novels are set within the same universe. Was this something you planned, or did it happen organically the more you wrote?

I planned it, though that's giving me more credit than I deserve. Paranormal humor is my preferred genre to write in (though I do others), so it seemed like a no-brainer to have everything take place in the same world. Don't worry, I'm not planning some kind of Avengers knock-off, or even a Justice League knock-off.

And I'm sure yours will be much more unique. What are some of your current projects?

I'm currently editing The Book of Bart - Verse 2. That's as official a title as I can give at the moment. I'm also going to work on Verse 3 during NaNoWriMo, my first official project during that event. The plan is to have both out next year. After that, it's finishing up this dark, funny, YA murder mystery noir I've been working on.