I met Effie Seiberg at this year's FOGcon, and I was immediately struck by both her engaging personality and unique writing voice. Her stories can be found in the "Women Destroy Science Fiction!" special edition of Lightspeed Magazine (winner of the 2015 British Fantasy Award for Best Anthology), Galaxy's Edge, Analog, Fireside Fiction, and PodCastle, among others. 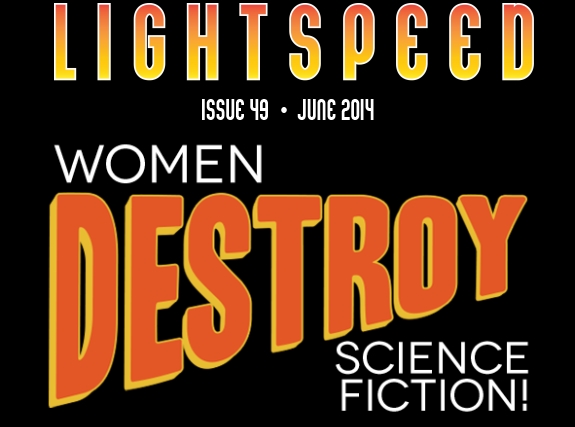 You've worked a variety of places, including Google, IBM, and Tor. What was your favorite job, and why?

My favorite job is my current one. I have my own strategy and marketing consulting business where I work primarily with tech startups. Being independent means it's easier to carve out time for writing, and working with lots of types of businesses means I get to learn a lot of new things! Learning more about 3D printing, artificial intelligence and machine learning, sneaky types of mobile phone tracking, and more, is all great fodder for science fiction.

I'll bet it is! What brought you to writing, and what do you wish you'd learned sooner?

I've always loved to read, in particular science fiction and fantasy. When I was in college I did a bit of creative writing for a few classes, but it took another ten years for it to become a substantial endeavor! I wish I'd known how much I really loved it and stuck with it back then, since then I'd have ten more years of practice under my belt. Now if only I could find a Time-Turner /TARDIS/ DeLorean...

I wish that too--until I remember what William Shatner said: “The journey must be taken in individual moments. Enjoy the ride for the ride.” Speaking of an exciting ride, you recently did a reading event with Peter S. Beagle. What was that like?

Not even gonna hide my fangirling here - Peter S. Beagle is one of my literary heroes. (When I was in middle school, "The Last Unicorn" was my all-time favorite book. In fact, I still have that old copy, which he's now signed!) So meeting him, chatting with him at the pre-reading dinner, and then actually reading with him, was an unbelievable honor. The guy is sort of a real-life version of the butterfly from "The Last Unicorn" - he peppers the conversation with references from the common (Shakespeare) to the semi-obscure (France's national poet in the 70s), and throughout is woven humor and deep wisdom. That sprinkling of references is something I've picked up in my own writing, and it took me until that conversation with him to see why! I hadn't realized just how influential he's been on my work.

And thanks for sharing it with us! What are some of your current projects?

Coming in May in Galaxy's Edge, "Carbon Dating" is a story written in collaboration with Spencer Ellsworth (http://spencerellsworth.com/), and is the story of the Internet gaining consciousness and scanning itself for dating advice. Predictably, internet dating advice is not always the most sound, and hijinks ensue.

Coming this year in PodCastle, "The Thirty-Seven Faces of Tokh-Bathon" is a story of a strict religion where monks devote their lives to solving a complicated logic puzzle, and of the little girl who cleans the temple and accidentally breaks the pattern of truths and falsehoods.

And separately, I'm currently working on a middle grade novel tentatively titled "The Bird Job", which has a mob war and con artists and a heist that goes terribly awry when a fire-breathing chicken-parrot hybrid hatches in the bank vault and imprints on the thieves. Hard to be stealthy with a squawking thing following you around and shooting fireballs into the air!

You can read more of my stories on my site, effieseiberg.com, and if you want daily musings, bad puns, and pictures of my dog Yoyo, you can follow me on Twitter at @effies.


This post can also be viewed here.
Posted by Karen McCoy at 11:30 AM