I was first introduced to CHASING SECRETS when I encountered it on a mock Newbery panel, and was amazed how Gennifer brilliantly revealed a small known part of San Francisco history within her beautifully crafted fiction.  I can't wait to see what she comes up with next. 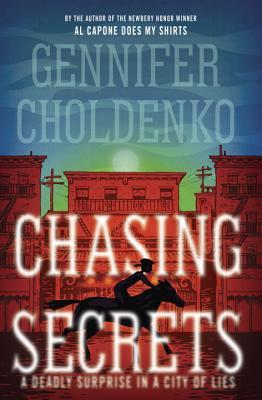 San Francisco, 1900. The Gilded Age. A fantastic time to be alive for lots of people . . . but not thirteen-year-old Lizzie Kennedy, stuck at Miss Barstow’s snobby school for girls. Lizzie’s secret passion is science, an unsuitable subject for finishing-school girls. Lizzie lives to go on house calls with her physician father. On those visits to his patients, she discovers a hidden dark side of the city—a side that’s full of secrets, rats, and rumors of the plague.
The newspapers, her powerful uncle, and her beloved papa all deny that the plague has reached San Francisco. So why is the heart of the city under quarantine? Why are angry mobs trying to burn Chinatown to the ground? Why is Noah, the Chinese cook’s son, suddenly making Lizzie question everything she has known to be true? Ignoring the rules of race and class, Lizzie and Noah must put the pieces together in a heart-stopping race to save the people they love.


According to your website bio, you drafted your first novel after graduating the Rhode Island School of Design. How did you know that writing fiction was the next step for you?

Honestly, I didn’t think writing fiction was the next step for me.  I was just going to write that one novel and then get busy on my illustration portfolio.  But the more I wrote, the clearer it became that I was a writer, not an illustrator.

Deep down, I always knew that.  I just didn’t want to admit it to myself because there is a legacy of unpublished writers in my family tree and I didn’t want to be one of them.

And you're proof that family tree legacies can be changed. In CHASING SECRETS, you offer a lens into a rarely discussed historical event--the San Francisco plague of 1900-1904. What inspired you to shine a light on this epidemic?

I’ve lived in the SF Bay area for most of my adult life, but I had never heard of the plague outbreak. That seemed strange to me.  And the more I read about the outbreak, the more horrifying the events seemed. I was shocked by the bigotry toward the Chinese.  Of course I knew the Chinese were treated terribly in 1900, but the plague story gave a clear window on just how widespread the anti-Chinese sentiment was.  And then there was the issue of vaccinations, which has chilling echoes in today’s world.  Honestly, the truth in that novel is so relevant today.

Indeed it is. Another of your novels, AL CAPONE DOES MY SHIRTS, is a Newbery Honor book. Which parts of the story have you found resonate most with readers?

People love the ending of course but what is the most striking to me is the number of letters from siblings and parents of kids with autism or other issues. When I wrote the book, there were no middle grade novels for kids with siblings with autism.  Thankfully now — thirteen years later — there are many.  When I was a kid, hardly anyone had ever heard of autism.  And having a sister with autism was really unusual.  I wrote the book I needed to read when I was eleven.  It turns out a lot of other people needed to read it too.   That said, though, the majority of letters I receive are from kids with neurotypical siblings.  People love Moose and they are utterly fascianted with Alcatraz #105.

I'm glad the series has made a lasting impact on so many readers! What are some of your current projects?

In May 2018, AL CAPONE THROW ME A CURVE will be out.  In 2019 an illustrated novel for younger middle grade readers: ONE THIRD NERD will launch.  Right now I’m working on the companion novel to ONE THIRD NERD and a new historical novel.  I am having a blast!!!