THE ROAD TO BITTERSWEET by Donna Everhart

I've been a fan of Donna Everhart since I first saw her writing in Janet Reid's flash fiction contests. Since then, she's published two amazing books: THE EDUCATION OF DIXIE DUPREE and THE ROAD TO BITTERSWEET, the latter of which released only yesterday. Donna's books are great for anyone, especially those inclined toward Southern historical fiction. 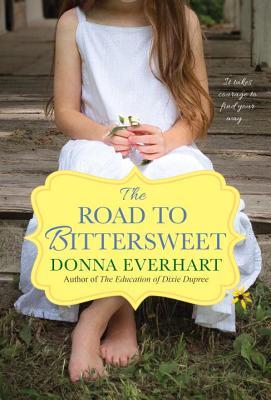 For fourteen-year-old Wallis Ann Stamper and her family, life in the Appalachian Mountains is simple and satisfying, though not for the tenderhearted. While her older sister, Laci—a mute, musically gifted savant—is constantly watched over and protected, Wallis Ann is as practical and sturdy as her name. When the Tuckasegee River bursts its banks, forcing them to flee in the middle of the night, those qualities save her life. But though her family is eventually reunited, the tragedy opens Wallis Ann’s eyes to a world beyond the creek that’s borne their name for generations.

Carrying what’s left of their possessions, the Stampers begin another perilous journey from their ruined home to the hill country of South Carolina. Wallis Ann’s blossoming friendship with Clayton, a high diving performer for a traveling show, sparks a new opportunity, and the family joins as a singing group. But Clayton’s attention to Laci drives a wedge between the two sisters. As jealousy and betrayal threaten to accomplish what hardship never could—divide the family for good—Wallis Ann makes a decision that will transform them all in unforeseeable ways…

According to your website, you write "Gritty Southern Fiction with a Down-home Style." Which authors have most influenced you and why?

This was the first southern fiction book I’d ever read and the catalyst, the impetus for pursuing my writing with some sense of determination.  Published in 1987, I didn’t know about Kaye Gibbons or her books until the early 90s.  She seemed to come out of nowhere, and her character, Ellen Foster, showed me what “voice” meant.  This is Kaye Gibbons’ unique talent, through and through, with all of her work.

Reading Robert Morgan is like reading poetry, and since I’m not a big poetry fan, it’s as close as I can get.  For me, this book was about the rhythm of sentences and the cadence of word choices.  It was a bonus it was such a great story to boot.


Dorothy Allison and the book, BASTARD OUT OF CAROLINA

In my opinion, her writing, among others, launched the whole grit lit, rough south genre.  The book was like peeking in the window at some of my relatives.  I could relate to this story so much, and what I learned from Dorothy Allison was to write without fear.  Write about what we would prefer not to know, what makes us look the other way, what makes us uncomfortable.


Indeed. THE ROAD TO BITTERSWEET is set in the Carolinas during the 1940s. What about this story landscape was the most fascinating to work with?

There is so much.  First of all, even to this day, there are pockets of people who live much like they did in the 40s.  They are likely hard to find (perhaps intentional), and they simply don’t care to change their way of living.  That’s just for interest, but using this part of my home state to write about gives me, as a writer, so much material.  You’ve got absolutely stunning, beautiful but very rugged and harsh terrain.  You’ve got weather that’s fickle.  You’ve got people set in their ways, hard-working, tenacious, and thrifty.  They sometimes don’t take kindly to outsiders.  In those days -  maybe even today – they call them “foreigners.”  I also love writing about times when it was simpler (or let’s be real – harder!), when there was no running water, no electricity, nothing but what a person could provide for themselves.  Then I like to imagine…what was that like?  If you’re used to it, as my characters were, it’s not such a big deal, but it makes for fascinating research, and then writing about how they did it hopefully makes for fascinating reading.


It certainly does! I like how you've featured a "First Sentence Friday" to preview your upcoming books on your blog. How did this come about, and what has been the most rewarding about it?

It’s sort of funny because I came up with it like I do my stories – something sparked the idea from what I read or saw at some point.  Either way, I was trying to think of ways to do something long term, and I wanted it to be engaging.  I had this sort of epiphany, what about first sentences?  What if I share them out?  I liked that idea but then I had to think about when/how often, and I thought “aha!”  Friday.  First sentence Fridays!  That makes it once a week – so it’s not too much, (i.e. daily).  It worked great because so far I’ve written two books that have twenty-eight chapters, meaning twenty-eight weeks of first sentences.  By then, I figure people have me and my book cover tattooed on their brains.


Close to it, anyway. :) What are some of your current projects?

I’ve finished my third book, called THE FORGIVING KIND.  I’m very, very excited about it.  My agent was thrilled with the story as was my editor.  It features a twelve year old girl named Sonny Creech, and her best friend Daniel Lassiter and is set in 1955 on a cotton farm, where after a tragic accident befalls the Creech family, they find themselves financially and emotionally caught up with a reclusive neighbor.  I’m currently working on the revisions and editing of it.  I’ve also started outlining and writing the first three chapters of my fourth book, no working title just yet.  Meanwhile, all I can do is think about how it needs to be as good as FORGIVING – or better if possible.  No pressure.  Not at all.   From here on out, I’ll be promoting THE ROAD TO BITTERSWEET, starting January 9th with my book launch at Quail Ridge Books in Raleigh, NC and in between all the events planned, I’m head down, working to hit deadlines.

THE ROAD TO BITTERSWEET


THE EDUCATION OF DIXIE DUPREE

This post can also be viewed here.
Posted by Karen McCoy at 2:37 PM