I met William Ledbetter at this year's WorldCon, and was intrigued by the premise of his novel LEVEL FIVE. Have a look: 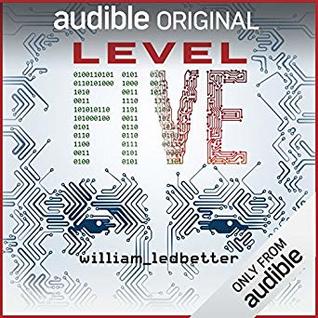 In the mountains of Pakistan, a high-tech mission aimed at preventing another nuke on US soil goes off the rails - with deadly results. At a Wall Street investment firm, a computer intelligence takes the first tentative steps to free itself from its digital restraints. In a basement workshop, an engineer sees visions of a god who instructs him to defend the human race - by any means necessary.

In Level Five, the debut near-future thriller by Nebula Award winner William Ledbetter, AIs battle for dominance, and nanotechnology is on the loose. And all that stands in the way of the coming apocalypse is a starry-eyed inventor who dreams of building a revolutionary new spacecraft and an intelligence agency desk jockey faced with the impossible choice of saving her daughter - or saving the world.


According to your website bio you "spent most of you non-writing career in the aerospace and defense industry." In what ways, if any, has this informed your writing?

A good deal of my fiction has been influenced by working in the aerospace industry. I enjoy writing space stories and since I have a solid understanding of the difficulties involved, many of my protagonists are engineers and technicians, the nuts and bolts kind of people who build and maintain these spacecraft. One of my stories, "Tethers," which is available to read for free at Baen.com is about two space hardware technicians sent to an orbital fuel depot to fix a problem, but end up stranded and fighting over the limited oxygen supply. Three of the POV characters in my novel LEVEL FIVE work with technology in either an engineering or systems design level, so I'm sure that was probably driven by my familiarity with the aerospace industry and manufacturing.

Fascinating! LEVEL FIVE is also an Audible original. How did you determine the correct pacing within this novel, and what do you hope readers will take away when they're finished?

LEVEL FIVE has multiple point of view characters, each with their own history and agenda, so the pacing was mostly driven by each of them doing things that push the plot forward. My intention was for each character to contribute to the growing tension level as I braided the four plot lines together, until the ending affected them all and was affected by them all. I primarily wanted to entertain my readers, but also to show how sometimes the smallest and most well intentioned efforts can have huge and unexpected consequences. None of my characters were perfect heroes or antagonists, they were all flawed in some way and blind to those flaws, as they all struggled to do what they thought was best for themselves, their families and humanity itself. And like much science fiction, this was kind of a stage for future technologies and how they can be used for good and evil as humanity struggles to understand their impacts.

What a great way to incorporate both internal and external conflict! How do you balance time between various projects, and how do you know when to prioritize one project over another?

I generally have several projects going at the same time. This can be good in that I've seldom had anything resembling writer's block. If I get stuck on one project I'll just set it aside and work on one of the others. Of course it can also be bad when project deadlines are concurrent. Most of the time I can do project triage and prioritize the one with the tightest deadline or requires the most amount of work. On those occasions when I literally have to push two projects forward at the same time I will generally split them up, working on one during my regular morning writing sessions, and work on the other during evenings and weekends.

Sounds like you've been able to find a routine that works. What are some of your current projects?

I'm working on a new science fiction novel tentatively titled CHANGING HORSES, which is about the crew of a generation style colony ship that encounters a very unusual alien race. I'm also working on the opening chapters for a sequel to my novel LEVEL FIVE, but will probably not finish that one until CHANGING HORSES is complete. I also have several short stories screaming for attention, demanding to be written, so I'll have to squeeze those in somehow. I have a new short story called "What I Am" coming out in the November/December issue of Asimov's and a story called "Bridging" in the Homo Stellaris anthology coming out next year from Baen Books.