A. G. Stewart is one of the best science fiction authors I know. Her book, LOOSE CHANGELING, was the first in the Changeling Wars series, and her latest, SPARE CHANGELING, debuted in October 2018. 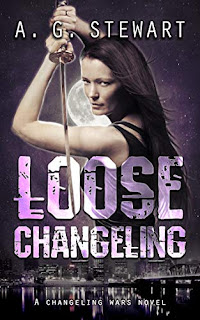 Nicole always thought she was regular-issue human...until she turns her husband’s mistress into a mouse. The next day, Kailen, Fae-for-hire, shows up on her doorstep and drops this bomb: she’s a Changeling, a Fae raised among mortals. Oh, and did he mention that her existence is illegal? Now she's on the run from Fae factions who want to kill her, while dealing with others who believe she can save the world. And there’s the pesky matter of her soon-to-be ex, without whom she can’t seem to do any magic at all... 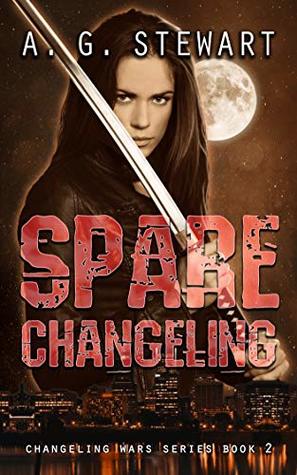 Nicole's life has finally wound down to normal--or, at least, as normal as life could be for a Changeling. Sure, her Fae hound roommate could be nicer, and she could use a part-time job to pay some bills, but she's closing the doorways between the worlds. She's got things under control.

Until she's framed for the murder of a Fae King.

Only a Changeling could have committed the murder, and Nicole is the only living Changeling. The Fae families hate her. The Court wants to execute her. Her hound and ostensible minion couldn't care less if she lives or dies. But what if they're wrong? What if there is a spare Changeling? Reluctantly, the Fae Court grants her a short reprieve to do the impossible: find out who placed the Changeling, find out who the Changeling is, and bring both parties to justice.

And if she could just keep the mortal world none the wiser while she does it, that would be great.


You recently moved to Southern California. What do you love most about this new adventure, and how have you kept writing amid this transition?

The weather and the beaches are pretty nice! But really, I think "adventure" is a good way to describe it. I'd been in Sacramento for 13 years, and felt quite settled. But my husband got his dream job, and following your dreams is important to both of us. I'd do it again in a heartbeat. Mostly I love how this move gave us the chance to work together as a team on a big common goal, which made it more fun than stressful! I kept writing through the move. I was mostly working on revisions through this transition, and honestly, there were some days I didn't touch my manuscript. But I moved down before my husband did, and there were times I couldn't do much to help on my end. So I wrote.

Sounds like a great place to do it! SPARE CHANGELING is the next in the Changeling Wars series. In what ways does the world you created expand in this new story?

In LOOSE CHANGELING, Nicole is just learning that the Fae world exists. I was able to explore that world a little more in the novella that takes place between the two books, but in SPARE CHANGELING, Nicole starts to actually learn some of the dynamics between the Fae families. And she learns that there is more to that world than just the Fae families. There are vast, wild areas that are still half-unexplored, with creatures she's not known existed. I'm so excited to share how Nicole's Changeling status, which seems to be a settled matter after book one, still causes a ripple effect in the Fae world that spreads into the mortal one.

And it shows how good characters inevitably affect the world around them. What are some of your current projects?

I'm currently working on Bone Shard Daughter, a multi-POV epic fantasy that takes place on an archipelago of migratory islands on the brink of civil war. Lush tropical forests, an ocean without a bottom, an adorable magical companion, a palace of locked doors with a mystery behind each, and a lot of discovering who you really are in a time of political upheaval. I'm pretty excited about it. I've also got the next Changeling Wars novella up on queue--A Beginner's Guide to Changeling Minds. Nicole has to learn how to use mind magic in order to keep a lid on Portland. And then there will be Changeling Times, which delves into the start of that war mentioned in the series name ;)