JAGGER JONES AND THE MUMMY'S ANKH by Malayna Evans

Working on my own Middle Grade project has inspired me to read more Middle Grade books. Month9Books has plenty of great selections, including JAGGER JONES AND THE MUMMY'S ANKH by Malayna Evans. This book looks like a great selection for public and school libraries alike. 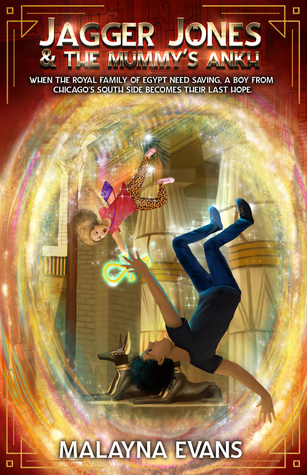 Jagger Jones is a whiz kid from Chicago's South Side. Ask him anything about Ancient Egypt, and Jagger can fill hours describing all that he knows. But when he and his precocious little sister Aria fall more than three thousand years back in time to the court of Amarna, Egypt, Jagger discovers a truth that rocks his world: books don’t teach you everything there is to know.

Mummies, pyramids, and cool hieroglyphics make awesome movie props, but the ancient court of Amarna is full of over-sized scorpions, magical amulets, and evil deities determined to scare unwanted visitors away. If Jagger and Aria are to return safely home, they must find nine soul-infested gemstones, defeat an evil general, save the royal family, and figure out how to rescue themselves!

Armed only with Jagger’s knowledge of history and a few modern objects mined from his pockets and Aria’s sparkly purse, the siblings have exactly one week to solve supernatural riddles and rescue the royal family. If they can pull it off, Jagger Jones just might return to Chicago a hero.

According to your author bio, you are an Egyptologist. What led to your interest in this field of work?

Honestly, I sort of zig-zagged my way into it. When I was in middle school, I spent every free hour consuming SciFi books—Anne McCaffrey, Piers Anthony, Madeine L’Engle. Those fantastical worlds took me out of my small town and into universes full of magic and dragons and goddesses. Eventually, after a few twists and turns, this interest led me to ancient history. Ancient Egypt is my true love, but I definitely dated Rome, Greece and Mesopotamia before committing.

Ha, I love that analogy! In JAGGER JONES AND THE MUMMY'S ANKH, Jagger discovers an Ancient Egypt that allows for magic. In what ways did you build and expand on this world?

That’s a great question. As an Egyptologist, I wanted to stay true to ancient notions of magic, so many of the artifacts, beliefs, even spells are loosely based on historical evidence. Sympathetic magic and amulets, for example, were key then, so they’re key in my story. But I built on what we know about ancient Egyptian magic in several ways. For example, one thing that stands out when you study ancient Egypt is how important the sense of smell was. References to how things smell are common in stories, poetry and art. Adding scents, like a whiff of lotus blossoms or herbs, to magic spells was a way for me to expand on the world while also incorporating an important detail of the culture—a detail we can’t easily recapture.

How interesting. As a historian, aside from Egypt, do you have a favorite time period in history you'd like to visit?

Ooooh, that’s a hard one! There are so many to choose from. I suppose if I had to choose just one, and it couldn’t be Egypt, I’d transport myself back to classical Athens (perhaps with a gender change – it wasn’t the best place to be a woman). I’d love to watch Socrates lecture, democracy debated, and goddesses like Athena worshipped.

Me too! What are some of your current projects?

Book two is fleshed out but there are loads of edits in my future. I’m working on book three now, and also playing with a new middle grade project that explores democracy—how it works, the structures that keep it in place, when and how it fails—into a light hearted story about a genie girl. Oh and I have a YA project about the only daughter of Egypt’s most successful female pharaoh. I find that I can edit a story better when I come back to it from a totally different world. It helps me see with fresh eyes. So I’m quick to start projects—some I fall in love with and some I kick to the curb quickly, but the next stages of Jagger and Aria’s story are definitely top priority.