I met K.C. Klein at the Arizona Dreamin'  Romance Reader Event last weekend and found out that she contributed to the HOTTER ON THE EDGE anthology with Erin Kellison, who I featured in a previous post. K.C. is loads of fun and her books sound fantastic! 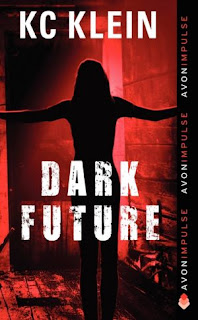 Awakened in the middle of the night by a future version of herself, Kris Davenport is given a mission; go forward in time to save the world and his life. Of course, her future self doesn't tell her who he is, just sends her into the abyss and straight into an alien invasion.

He turns out to be ConRad Smith, the callous, untrusting Commander of Earth's army and the world's last defense. There's only one way to know for sure if this strange woman is an alien spy, slice her throat. Except, he didn't anticipate the heat he would feel as he interrogates the hot-tempered, warm-blooded woman. For a man whose sole focus has been survival, she's more temptation than he can handle. But a world on the brink of destruction leaves no room for love;and time is running out. 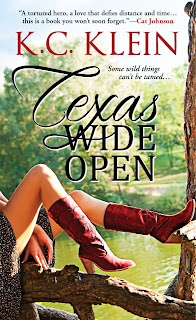 Katie Harris loved growing up on a ranch. She had her horse, the beautiful Texas prairie, and Cole Logan, the cowboy next door. But
there are a lot of secrets hidden under a Texas sky…

Katie always knew she’d marry Cole one day—until he broke her dreams and her heart. But now that Katie’s father is sick, she’s back home, older, wiser, and nowhere near the love-sick fool she once was.

Cole knows Katie doesn’t want anything to do with him. But after so many years, he can’t pretend she’s no more than a neighbor. Not when thinking about her cherry lip gloss and hell-for-leather passion is keeping him up all night. Holding his ground was hard enough when she was seventeen. Now that she’s her own woman, Cole’s heart doesn’t stand a chance…

First of all I wanted to say thank-you to Karen for offering to do an interview with me. I met Karen at the AZ Dreamin’ Reader Event in Phoenix this last weekend and had a blast. It was fun meeting avid readers in the romance genre and some cool aspiring authors. Thanks again, Karen!


No problem, K.C.! It says on your website that you started writing seriously about three years ago. What led to this, and can you tell us more about your journey toward becoming a writer?

Well, I guess I’ve been writing closer to four years now, but I still remember the night I joined RWA. Since reading my first book in second grade, I’ve always wanted to be a writer. I had fussed with stories here and there, but was too scared to let anyone read my work. It wasn’t until I was standing in my kitchen crying, complaining to my husband about how I was letting my dreams go that he looked at me and said, “Well, go get happy.” That’s when I realized I had a choice. I could let fear prevent me from what I wanted to do or I could go out and do it anyways.

Fear is such an inhibiting force--I'm glad you conquered yours! Where did the idea for DARK FUTURE come from, and what do you want readers to take away when they're done reading it?

I wrote DARK FUTURE during a difficult time in my life. My first child, though a sweetheart now, cried the entire first year of her life. I spent all my waking hours either walking the floors with her or working full-time. For a person who used to read one to two novels a week, I had a bad case of reality-bites. During those long nights, I started thinking of a story I could play in my head to entertain myself. I wanted something dark and gritty, yet fun to read. My hero, ConRad, came to me first, and then from there it was simply creating a world where this hardened warrior, but super-sexy man could exist.

Sounds like ConRad has an interesting story to tell! Your other story, TEXAS WIDE OPEN, just got a new cover. Congrats! Can you tell us more about the book and what led to the decisions regarding the cover?

This story was my break from the dark, dystopian world I created in DARK FUTURE. At the time, I was spending my Friday evenings taking my oldest daughter to horse riding lessons. As I sat there next to the dusty arena, in ninety degree heat, I thought about that special relationship girls have with their horses. I then threw in my own special blend of guilt, lust, and betrayal, and TEXAS WIDE OPEN was born.

As far as for the cover, my publisher had the final say, but I was fortunate enough to have an editor that wanted my input. I usually have a feel for what I want the cover to convey. We both agreed on something that said Texas, cowboys, but also super-sexy. I think Kensington’s art department nailed it.

I think so too--and it's nice to read lighter material along with the dark stuff. What other projects are you currently working on?

I will be releasing another sexy, sci-fi, anthology, which for me will be a continuation of the story in HOTTER ON THE EDGE. I also am leaning toward a sequel for DARK FUTURE (a lot of fans have asked for the sequel), but I also have a very cool YA series that is begging to be written.

Ooh, I want to hear more about that YA series! When I saw you at AZ Dreamin' , I noticed what a great job you did in promoting your books. What do you recommend to newer authors trying to market their work?

Marketing is so hard, especially for authors. My best advice is that it all takes time. Building a solid fan base does not happen overnight, neither does writing a great book. Spend time on social networks, but I caution spending money on promotion. Most of the advice I’ve read is promotion is wasted until you have at least three books out. I will have my second full-length novel and second anthology out by the end of this year, so I hope I’m heading in the right direction.

Thanks again for having me. I always love to talk to fellow readers!

And here's where to find her books:


Posted by The Writer Librarian at 6:00 PM