THE CLOUDED SKY by Megan Crewe

I'm a huge fan of sci-fi, especially in YA. So when I found out about Megan's books, I couldn't wait to feature them. Have a look for yourself: 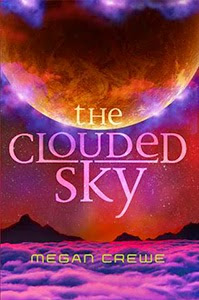 When seventeen-year-old Skylar escapes the time-bending Enforcers who secretly control Earth, her troubles have just begun. She and her friend Win take refuge on Win’s home space station with his fellow rebels, but the fate of Skylar’s planet still spins out of her control.

To avoid detection, Skylar poses as the Earthling “pet” of Win’s rival, an arrogant boy named Jule. Homesick and faced with a cool reception from the other rebels, she throws herself into the group’s mission: assembling a weapon to disable Earth’s restrictive time field. Gradually, Skylar’s skill for detail gains respect—even from Jule, who is more vulnerable than he lets on.

Yet challenges spring from every side. Not only must Sky navigate the muddy waters of romance, but suspicions of betrayal grow among the rebels as their work narrowly misses sabotage.

In the latest in Megan Crewe’s Earth & Sky series, can Skylar expose the traitor before time runs out and Earth is destroyed?

Like many authors, Megan Crewe finds writing about herself much more difficult than making things up. A few definite facts: she lives with her husband, son, and three cats in Toronto, Canada (and does on occasion say "eh"), she tutors children and teens with special needs, and she can't look at the night sky without speculating about who else might be out there. Her books for teens include the science fiction Earth & Sky trilogy, the post-apocalyptic Fallen World trilogy, and the paranormal Give Up the Ghost. You can find her online at www.MeganCrewe.com.

Megan was also kind enough to answer some interview questions:

Before publishing novels, you wrote short stories for ezines, print magazines, and anthologies. In what ways does the short story process differ from writing a novel, and what do you like about each?

To be honest, the main reason I wrote short stories was that I didn't always know I was going to be a YA writer, and publishing short fiction was considered the standard way to get your foot in the publishing door as an adult speculative fiction author. I'm very much a long form writer and struggled to keep my short stories at an appropriate length--I like to joke that I was usually trying to fit a novel-sized idea into a short story container, which is reasonably accurate.  ;)  But one thing I did enjoy about writing short stories is the feedback cycle is much shorter. You get to feel the accomplishment of finishing a story, or finishing a revision, much faster than with a novel, and you can share that story with readers and find out how it's coming across much sooner after you start. It can be a little unnerving working away at a novel for months not having any clue yet whether anyone's going to enjoy what you're writing! That trade-off is worth it because novels allow me to explore the characters and scenarios I've become invested in with much more depth and complexity.

And I love the scenarios you've established. THE CLOUDED SKY is the second in the Earth & Sky series. How did the idea come to you, and what do you want readers to take away when they're finished reading?

With THE CLOUDED SKY, I wanted to take the situation I'd set up in the first book of the series and push it farther. In this case, that meant sending the main character, Skylar, right off Earth to directly experience the alien society that's been experimenting with our history. I came up with the idea of making the story something of a spy thriller (in space!) while trying to figure out how Skylar could actively be helping the rebels' mission to free Earth at the same time as she had to keep her existence a secret. In the restricted atmosphere of the alien space station amid all the subterfuge, it felt like a natural fit.

With this story I mainly want to leave the readers shocked and eager for the final book. I decided how I wanted to end book 2 before I even started writing the first (with a glee that often came with an evil grin) and it's been great seeing how that twist has affected readers so far.


Sounds fantastic! The Fallen World trilogy involves a deadly virus on an isolated island. How did the story develop as you wrote it, and what advice, if any, do you have for people who want to write a series?

With the Fallen World trilogy, I started off just knowing I wanted to write a YA novel about an epidemic. The other details emerged by letting the story simmer as I worked on other things and noting down ideas as they came to me, through researching viruses and epidemics in history and the modern day, and through reading other novels involving epidemics to get an idea of what's already been done and what areas I might explore. I usually have a pretty good idea of all the important stuff in a book before I get down to the actual writing. One thing that did evolve as I wrote were the characters and their relationships. I find it's difficult to get a solid handle on my fictional people until I'm committing them to prose, and then I discover new things about them, their interests and motivations, which I adjust the story around.

For advice on writing a series, I think a lot of it depends on what sort of writer you are in general. As a plotter, my advice to fellow plotters is to figure out the most important points of the later books ahead of time. You don't need a full outline (and it's probably best not to have one, since the first book will evolve through edits and affect how the second book needs to be told), but it was really helpful to me to have a general idea of where I intended to take my characters, where I saw them ending up, and what their biggest struggles were going to be. It made me feel more confident when I started outlining and writing the later books, and reassured me that I did have that much more story to tell, and it also informed me on details I should make sure to include in the first book to set up later scenarios.

I think it's also a good idea of have what's often called a "series bible" where you note down all the details about the characters, the settings, etc., although I have to admit I'm not very good at keeping up on these myself and often end up just searching the earlier books to make sure I'm keeping proper continuity.

Great plotting advice! What are some of your current projects?

I don't have any I can talk about in much detail at the moment, but I can say I have a couple of standalones and the beginning of a new trilogy at various stages of completion, all YA, various types of speculative fiction. I hope to have more news to share soon!

We look forward to it! Thanks for such a great interview.

To grab THE CLOUDED SKY and the first book in the series, EARTH & SKY for yourself, feel free to click the Amazon icons below:

And here's the Fallen World trilogy too: