THE BLUE WOODS by Nicole Maggi

Last year, I featured Nicole Maggi's Twin Willows series. I also had a chance to meet her at the American Library Association (ALA) conference last June:

The final book in Twin Willows trilogy, THE BLUE WOODS, debuted on January 12. Have a look: 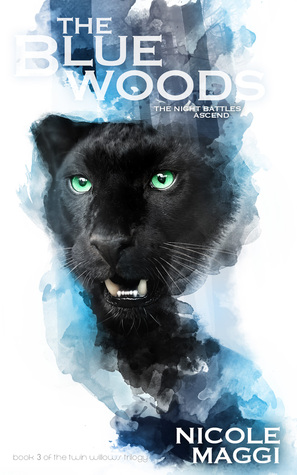 Sixteen-year-old Alessia Jacobs wants to go to college someday like her friends. She wishes for a chance at a normal relationship with Jonah. But normal is never an option for a Benandante like Alessia, who has sworn to protect the magic in the world from the Malandanti . . . especially when Jonah is on the opposite side of the deadly struggle. When the war comes to a head, lives will be lost, love will be gained, and Alessia will risk everything to save the people she loves and destroy the Malandanti once and for all.

In our last interview, you said how important it was for you to be spontaneous when you write. Was this true when you were writing THE BLUE WOODS, and were there times the plot deviated from your original plan?

I think it was less true on THE BLUE WOODS than any other book I've written, and that's just a necessary ramification of writing the third book of a trilogy. I knew where the trilogy had to end, and by the time I started writing THE BLUE WOODS I knew many stops along the way of getting us there. That said, I did have one huge moment of spontaneity while writing. I had plotted the book out with this big spoilery thing happening around page 200 (about 100 pages from the end). I had written about 50 pages past that point and I looked at the book and thought, "this whole thing falls apart at page 200. What's going wrong?" And I realized that the big spoilery thing that happened at page 200 actually needed to happen at the end of the book, at the climax. So I scrapped the 50 pages I'd written, and wrote the last 100+ pages without any kind of plan, except to get to that big spoilery moment. And this was about three weeks before my deadline (which I had already extended twice so I absolutely could not ask for another extension). But writing the last third of the book without a road map was pretty exhilarating, and the book is much better for it.

I love when stories come together that way. In what ways has the world grown since WINTER FALLS and IN THE MOUTH OF THE WOLF?

In the second book, IN THE MOUTH OF THE WOLF, we got to meet new characters from each side of the Benandanti vs. Malandanti war, and we learned a lot more about the mythology. We also got to see a lot of the magic from the Seven Sites in action, mainly through the character of Bree, who I brought in as a second POV character in that book. All of that just expands outward in THE BLUE WOODS. We see more magic, more characters and, most exciting to me, more of the Seven Sites. In this book we travel to Tibet and it was so much fun to write that section (and emotional, because Something Big happens there). The Tibetan Benandanti Clan is my favorite. They all transform into Snow Leopards, which I think is one of the most magnificent animals on the planet.
Every time I had a scene with the Snow Leopards in it, I got really happy.

We also travel to Italy in this book, which was really special to me. The mythology of the original Benandanti was where the idea for the trilogy began, and it was really cool to revisit some of that and write my own twist on it. Plus in that section we get to meet Alessia's maternal grandparents, and see Alessia realize that even though Twin Willows is where she lives, she has another home halfway around the world. The heart of the world of the trilogy will always be the town of Twin Willows, but in THE BLUE WOODS we get to see all the arteries that lead to that heart.

What a lovely way to round out Alessia's world! Now that the Twin Willows trilogy is complete, what's next? Do you have any book ideas brewing?

I do! I am writing a contemporary novel for my other publisher, Sourcebooks Fire. I don't want to say too much about it, because it's still in the very early stages, but it will be dark and character-driven and similar in tone to my standalone thriller, THE FORGETTING. I'm very excited about it. But I'm sure it won't be long before I'm writing fantasy again. I can't stay away from it. Fantasy is my jam!

Mine too! Thanks, Nicole, for another excellent interview!

To grab all three of the books in the Twin Falls trilogy for yourself, click the links below:


IN THE MOUTH OF THE WOLF