I had the fortune of winning REGRESS as part of a Facebook event, and I'm loving it so far. I also met SF Benson at UTOPiAcon, and she is one of my favorite people. Have a look at this amazing premise: 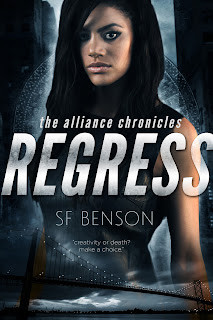 The United States has fallen.
Creativity is banned.
A government-mandated vaccine which totally blocks creativity.
It’s 2025 and the country is run by a group of scientists and technologists.
Tru Shepard, a soon-to-be seventeen-year-old, wants to avoid the vaccine. Without self-expression, Tru would rather die.
Zared Aoki has his own secrets. He wants Tru’s help exposing the plans of a corrupt, domineering government. In exchange, he’ll help her avoid the vaccine.
Failure is not an option. Tru refuses to live a colorless, dull existence.
10 days.
That’s all the time Tru has.
Lies and secrets make up her world. Is she ready to learn the truth?

What led you to writing in the first place, and what have you learned from your publishing journey so far?

Good question. I’ve always wanted to be a writer, but was too scared to actively pursue it. Back in those days (the dark ages), self-publishing was unheard of. So you needed an agent and a publisher. Bottom line—I didn’t think I was good enough.

Two years ago I was floundering trying to move forward in life. I’d spent nearly eight years working with animals as either a vet assistant or in customer service. Rewarding work but not creative in the least bit. So I quit my job and decided to find a new career path. Things weren’t gelling for me. I learned about NaNoWriMo and told my husband. He said that if I wanted to pursue it, I should go at it 110%. I’d just read Veronica Roth’s books and was inspired to write Young Adult. Then I had a dream about a girl trying to uncover a conspiracy about clones. The rest is history. LOL!

What I’ve learned about publishing? Man, there’s so much and I don’t think you ever stop learning. I guess the biggest lesson has been do your best and when you think you’ve reached that point push harder. Another lesson has been you can’t please everyone. There will always be someone who doesn’t like your books. That’s life. You have to have a thick skin and you have to write for YOU first. I think remembering that is the battle all authors face at some point. When you no longer care about what you write it’s a clear signal to stop and move on.

A good lesson for us all. And I love the premise for REGRESS. What do you think is most damaging about suppressing creativity?

As Tru Shepard put it… “Imagine not being able to describe a golden sunset, a blustery fall day, nor the new birth of spring. Imagine never experiencing Beethoven’s intense and funereal “Moonlight Sonata” or Tchaikovsky’s spirited “Violin Concerto in D Major.”

A world without creativity would be dull. It’s art and music and words which allow us to escape and renew ourselves. Without these things we run the risk of becoming automatons moving hopelessly through life. Suppressing creativity suppresses hope. Who would want to live in that world?

I certainly wouldn't! What are some of your current projects?

Let’s see… I just finished working on Release (the prequel for the Alliance Chronicles). It’s in its last stages of revision before going to beta readers and then editing. I also just finished the rough draft for book three, Rebel.

I’ll be drafting book four of the Alliance Chronicles (Restore) for this year’s NaNoWriMo. I’ve also started planning the last novella of the series, Renegade.

Currently, I’m working on the rough draft for Cursed Hearts. It was previously a short story published by the Debut Collective (Against All Odds). I’m planning a two book series, Cursed Hearts and Blessed Hearts. The first book expands the story of Kelsie and Victor (a teenage succubus and a vampire looking for love). The second book is dedicated to Kelsie’s brother, Cash. He’s an incubus who doesn’t believe in love. He didn’t think love would find him.

I’m also working on a couple of short stories for inclusion in two different anthologies, one horror and one an alien story.

Finally, I’m working on a new brand. I’ll be writing paranormal romance under the name Nadirah Foxx. The first book, Delivering Sin, is scheduled for August 2017. 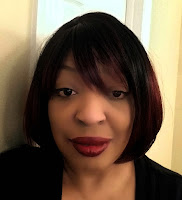 SF Benson, a Michigan native, resides in Georgia with her husband and daughter. She has always wanted to be a writer, but she’s had a variety of positions ‘feeding’ her creative brain. SF is an avid bookworm who appreciates a well-written book regardless of genre. She writes stories that explore ‘what if’. Her stories tend to feature strong, diverse protagonists in dystopian, science fiction or paranormal worlds.
For more information, visit her site at: http://authorsfbenson.com/
Posted by Karen McCoy at 12:14 PM