LOU LOU AND PEA AND THE BICENTENNIAL BONANZA by Jill Diamond

I first fell in love with the Lou Lou and Pea series back in 2016, and I first featured it here. This newest installment finds the girls planning a big party in their neighborhood of El Corazón: 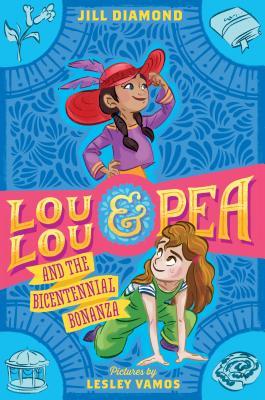 BFFs Lou Lou Bombay and Peacock Pearl are busy preparing for the Bicentennial Bonanza, their city's two-hundredth birthday bash! And this year, the party will take place in their beloved neighborhood of El Corazón. With a baking contest, talent show, and a new gazebo planned, the community can't wait to celebrate the founders (and historical BFFs), Diego Soto and Giles Wonderwood. But when Vice-Mayor Andy Argyle claims the festivities belong to Verde Valley, using a mysterious diary as evidence, Lou Lou and Pea smell trouble. Will the friends be able to uncover the secrets of their city's founding, and bring the Bonanza back to El Corazón?

In our January 2017 interview, you said you were working on LOU LOU AND PEA AND THE BICENTENNIAL BONANZA. What, if anything, about the story has changed since then?

At that point, the story was generally in its near-final form as far as plot was concerned. But, it definitely went through a lot of shining and polishing before it was published in April of 2018, not to mention Lesley adding her fabulous illustrations. I think I also fell more in love with the book as the publication process moved forward. Since, the first book, LOU LOU AND PEA AND THE MURAL MYSTERY, was my debut, I was attached to that story from the get-go, but with BONANZA, I grew to adore the story more and more as it became more familiar to me. Now, I love BONANZA and MURAL equally.

And it shows the unexpected ways that plot can develop during a polish! I also love how the Lou Lou and Pea books contain back matter like a DIY garden party hat and other crafting activities. Who comes up with the ideas for this content, and what do you like most about it?

It's a collaborative effort, with my wonderful editor at FSG, Grace Kendall, doing a lot of the work. She was the genius behind the hat craft and the flower crown and even field tested the crafts with her younger cousins! I really like the fact that the crafts give readers a chance to essentially become part of the LOU LOU AND PEA world. A hands-on experience that brought me closer to a characters and a story is exactly the sort of thing I would have loved as a kid reader so I was delighted to include these things in the LOU LOU AND PEA books.

Excellent. If you could tell your younger writer self one thing, what would it be and why?

That I would publish a book one day, so keep writing! Although, my younger self was way more confident and consistent as a writer so I probably would have said, "DUH!" whereas my adult self would say, "No way, really?" I took a long break between being a very prolific young kid writer and not writing much as an adult. If I'd known that writing would turn into a beloved career for me, maybe I would have started earlier in adulthood and had time to learn more about craft prior to writing my first book.


This post can also be viewed here.
Posted by Karen McCoy at 2:28 PM