IRON CIRCLE, the second book in the YELLOW LOCUST series, by Justin Joschko

I first heard about Month9Books when I featured Tobie Easton. Another Month9 author, Justin Joschko, has a book called IRON CIRCLE debuting next month. When I saw the cover, I had to spread word about it, as well as the rest of the Yellow Locust series: 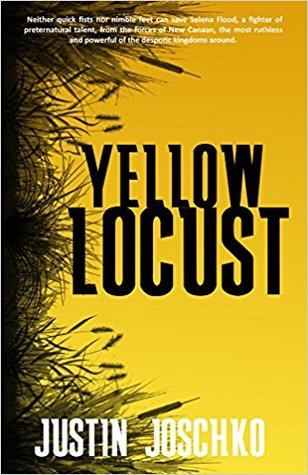 Selena Flood is a fighter of preternatural talent. But not even her quick fists and nimble feet could save her parents from the forces of New Canaan, the most ruthless and powerful of the despotic kingdoms populating America-that-was.

Forced to flee the tyrannical state with her younger brother Simon in tow, Selena is now the last chance for peace in a continent on the verge of complete destruction.

In her pocket is a data stick, the contents of which cost her parents their lives. Selena must now ensure it reaches the Republic of California—a lone beacon of liberty shining across a vast and barren wasteland—before it’s too late.

Between New Canaan and California stretch the Middle Wastes: thousands of desolate miles home to murderers, thieves, and a virulent strain of grass called yellow locust that has made growing food all but impossible. So when Selena and Simon stagger into Fallowfield, an oasis of prosperity amidst the poisoned plains, everything seems too good to be true—including the warm welcome they receive from the town’s leader, a peculiar man known only as The Mayor.

As Selena delves deeper into the sinister secrets of this seemingly harmless refuge, she soon learns there is a much darker side to Fallowfield and the man who runs it. Before long, she must call upon the skills she honed in the fighting pits of New Canaan to ensure not only her own survival, but that of her brother, in whom the Mayor has taken far too keen an interest. And she’d better act fast, for an all-out war inches ever closer, and New Canaan is never as far away as it seems. 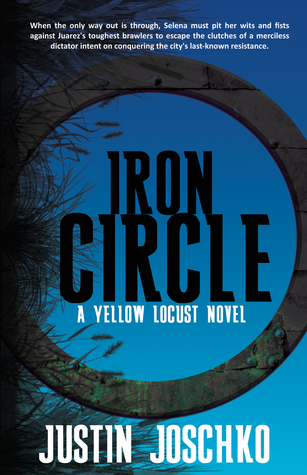 The path west is long, but despite Selena’s progress, New Canaan is never far enough behind her. It was there that her parents were killed, forcing her and her little brother Simon to flee the tyrannical state. Now, New Canaan wants control over every last inch of America-That-Was. Only the Republic of California can stand against it—but not without the data stick in Selena’s pocket, rumored to contain vital information about New Canaan’s deadly new weapon.

As winter closes in, Selena races south in search of an open passage to the coast. She must pass through Nuevo Juarez, where a ruthless leader named Thorin has seized power. Selena runs afoul of Thorin’s men and is separated from her brother, captured, and auctioned off at the city’s thriving slave market.

Her only way out is through the Iron Circle, a fighting ring where the city’s most fearsome warriors pit their skills against one another. As the populace and Thorin watch Selena rise through the ranks, Selena earns a reputation she doesn’t want and the attention of man with the power to destroy her and what’s left of America-That-Was.


According to your Author Bio, your writing has appeared in newspapers and literary journals across Canada. How did these publications come about?

A couple of different ways. I used to write a fair bit of poetry and short fiction before transitioning into novels, and after a lot of submissions, some of these got picked up by various outlets. Grain published a poem of mine, and I appeared in a couple of anthologies for horror and speculative fiction. I've appeared in some American journals as well, but since I'm Canadian and attended Canadian universities, I was much more familiar with the journals in this country, which is where most of my submissions went.

While pursuing my own projects, I also worked as a freelance writer and editor, which led to me writing a number of non-fiction pieces--some credited, some ghost-written--that appeared in several of Canada's biggest newspapers, including the Huffington Post, the Globe and Mail, and the Toronto Star. I also co-wrote a popular science book called Scientific Parenting that explores the genetic and environmental factors that influence early child development. In recent years, I've drifted away from this sort of non-fiction work, and now my writing tends to be either my own novels or academic work published in peer-reviewed journals.


Speaking of your novels, IRON CIRCLE marks the second book in the Yellow Locust series. In what ways, if any, did Selena's story expand in ways you didn't expect?

I didn't set out to write a multi-book series, and the possibility of Yellow Locust having a sequel didn't even occur to me until about the third draft. It was then that the story opened up beyond the immediate conflict in Fallowfield, and drew in much of the backstory about New Canaan and the broader concerns of the continent. Once those ideas were in play, it no longer seemed sufficient to let Selena and Simon ride off into the proverbial sunset. I needed to follow her there and see what she found.


What a great analogy. I'm always curious what characters might find in the so-called distant sunset. Along that vein, what do you think are the necessary elements of a good story?

I think there are three essential elements that make up a story: plot, character, and style. A great book excels in all three areas (think We Have Always Lived in the Castle, A Confederacy of Dunces, or The Book of the Long Sun), but a good writer can flub one of these a little and still turn out solid work. Lovecraft's characters make cardboard look dynamic, but the man wrote stories in eloquent prose that fundamentally rethought the very nature of what "evil" is, so he pulled it off. Ken Follett's prose is unadorned and even a bit flat at times, but he builds worlds rich in historical detail and writes characters that engage you (even if they tend towards a fairly basic good-evil dichotomy). Probably there are books that excel simply by knocking one of these elements out of the park, but generally speaking any book I've enjoyed has gripped me in at least two of these three areas.

Makes sense. What are some of your current projects?

I've written a couple of books that fall outside of the Yellow Locust universe, which I'm hoping to get published at some point. One is a horror novel set in my hometown of Niagara Falls, the other a sort of urban fantasy along the lines of Neil Gaiman (if I may make so bold a comparison). I've never been good at sticking to one genre, as a reader or a writer, so I imagine I'll keep bouncing around in years to come.