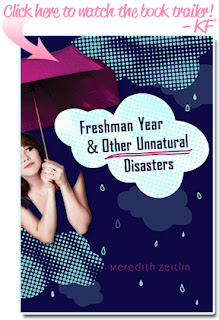 This week I'm happy to feature Meredith Zeitlin's upcoming book, FRESHMAN YEAR & OTHER UNNATURAL DISASTERS, slated to come out in late-February/early-March. After the book releases, I'll have a contest, giveaway, etc here on the blog...more details to be revealed then.

Synopsis, from Goodreads: Kelsey Finkelstein is fourteen and FRUSTRATED. Every time she tries to live up to her awesome potential, her plans are foiled – by her impossible parents, her annoying little sister, and life in general. But with her first day of high school coming up, Kelsey is positive that things are going to change. Enlisting the help of her three best friends — sweet and quiet Em, theatrical Cass, and wild JoJo — Kelsey gets ready to rebrand herself and make the kind of mark she knows is her destiny.


Things start out great - her arch-nemesis has moved across the country, giving Kelsey the perfect opportunity to stand out on the soccer team and finally catch the eye of her long-time crush. But soon enough, an evil junior’s thirst for revenge, a mysterious photographer, and a series of other catastrophes make it clear that just because KELSEY has a plan for greatness… it doesn’t mean the rest of the world is in on it.

Kelsey’s hilarious commentary throughout her disastrous freshman year will have you laughing out loud—while being thankful that you’re not in her shoes, of course…

Below is my interview with Meredith:

I see from your author bio that you are also a voiceover artist. As an aspiring writer with a full-time job, I'd be interested to know more about how to balance two different careers. What are some lessons you've learned in this process?

Yep - I've been doing v/o for almost ten years now (yikes!). If you're interested, you can find out more about that here: http://www.mzspeaks.com/. Here's the whole truth, though: my “full-time” v/o job isn't really very full-time. There are days I'm in the city running around to four or five appointments, but that's not necessarily typical; there are just as many days that I have nothing to do at all and stay in my PJs all day. So, I'm incredibly lucky to I have a ton of time to spend writing. I'm unlucky because I'm the world's worst procrastinator – in fact, it's actually on my busiest days that I tend to get the most writing done, because I can't keep putting it off for the nebulous block of time known as “later.” I have friends who are professional writers and keep very strict schedules - I honestly have no idea how they can be so disciplined, but I am totally in awe of them.


I'm glad you've found a way to do both! More writers are blogging about managing time/avoiding burnout, and the balancing act can be challenging for all of us...

I found it interesting that you named your website domain after your protagonist. How did you come to that decision, and what would you recommend to aspiring writers to promote their online platform?

Ah, good question! Well, I actually bought the site domain a long time ago, when the book was called "The World vs. Kelsey Finkelstein." Then after we changed the title, I had a few choices: leave it as it was, change it to an insanely long name (the new title), change it to an acronym that wasn't a real word and I was afraid no one would remember, or use my own difficult-to-spell-and-pronounce name. I ultimately decided that people would be most likely to remember how to spell Kelsey Finkelstein and left it at that.

As to promotion, the biggest thing I've learned is that it really is up to the author to self-promote. I made my own website, my own trailer... the publisher does a few things, but on a much smaller scale (which makes no sense, I know, but that's the way it is). Anyway, I'd recommend getting on Twitter and build a following if you can, approaching people you know who are social-network savvy, begging your Facebook friends to repost your updates about the book... I'm really still figuring it out as I go along!


Promotion is definitely a must! Thanks for the tips, and I hope those promotional avenues bring returns on your efforts!

I can tell from the premise of FRESHMAN YEAR AND OTHER UNNATURAL DISASTERS that you are able to effectively insert humor in your writing. What advice do you have for writers who want to incorporate humorous elements into their stories? How important do you think a sense of humor is for an author?

Hm. Well, trying to be funny - or to write funny - is never a good idea. If it comes naturally, it will read naturally, and that's when it works, I think. You never want the reader to feel like what they're reading took WORK, if that makes sense - and that goes for comic and serious pieces. Just like, when you're listening to a song, you don't want to be aware of the singer's struggle to hit the high notes - it should sound easy so the listener can relax and enjoy the performance, instead of worrying if she'll crack at the top.

I think every author definitely needs a sense of humor, though - not necessarily so they can write funny material, but so they don't take things too seriously. My personal journey with this book was loooooong and often extremely frustrating. If I hadn't been able to laugh about it (and I wasn't always able to!), I think I'd have gone nuts.


I absolutely agree. A sense of humor can make most anything more bearable. How did you come to the decision to pursue writing as a career? What do you love most about it?

I actually come from a family of writers, and it's something I've always done. I entered poetry competitions as a kid, wrote for the high school paper, and later became its EIC. I was in a 12-person screenwriting program in college. I wrote essays, articles and reviews for various publications and websites after I graduated, and was usually working on something creative of my own as well. "Freshman Year..." was the first big project I completed and decided to move forward with, tho - I really wanted to get the book out there. And without question, what I'm loving most is finding out how teens and tweens are reacting to it. Because as much as I love hearing what my friends and colleagues think (and their opinions are extremely important to me), I really wrote the book for the awkward 14 year olds out there.

So true--I think there's an awkward 14-year-old in all of us! What are some other projects you're working on?

Well, I wrote a children's book that my agent is pitching now. And I wrote a horror script - VERY different from the book! - with a friend that we're hoping to find a home for. I also have a new YA novel brewing that isn't a sequel to "Freshman Year..." but takes place in the same world. So look out! You might see some of the characters again...

I look forward to it! The tone in Meredith's book is refreshing, and she does a great job of capturing a unique character voice. Keep on the lookout for this book when it comes out!
Posted by The Writer Librarian at 10:39 AM