SOMEONE ELSE'S FAIRYTALE, by E.M. Tippetts

I'm very happy to feature SOMEONE ELSE'S FAIRYTALE, by E.M. Tippetts (she also writes science fiction under the name Emily Mah). She's the first writer I know of who, in addition to writing and jewelry making, maintains two blogs-- one under E.M. Tippets and the other under Emily Mah. 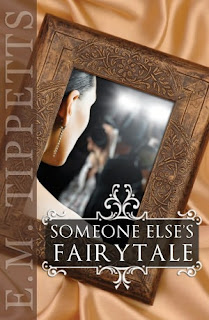 Here's the summary from Goodreads:

Jason Vanderholt, Hollywood's hottest actor, falls head over heels for everygirl, Chloe Winters, who hasn't gotten around to watching most of his movies. It's the ideal fairytale... for most people. The last thing Chloe needs is public attention as this brings back dangers from the past that she's worked her whole life to escape.


Emily was also kind enough to let me interview her. Here's what she had to say:

When did you decide to become a writer? Could you tell us a bit about your journey since then?

I've wanted to be a writer for as long as I can remember, and to put that in perspective, I remember my first day if preschool in detail, from the way I felt abandoned to the magic marker drawing of a horse I had with me, drawn by my cousin, Sarah. So it's been a long journey since then. I wrote a lot as a kid and as a teenager. When I was nineteen I got a letter from DAW that said they really liked my manuscript, suggested some changes, and invited me to submit again. I was so inexperienced that I didn't know what that meant (it means you're very close to making a sale), so I didn't pursue it, just dove into another novel. After law school I decided to turn my attention to writing and I attended the Clarion West Writers Workshop for Science Fiction and Fantasy. After that I was invited to join Critical Mass, a critique group in my home state of New Mexico. Back then I had the naive idea that with all my practice and a good credential like Clarion West, I'd then start selling short stories, eventually get an agent, sell novels, and so on. While there isn't anything I truly regret about my life, I would counsel anyone else still in high school who wants to be a writer to get training sooner, and keep it up. It took me five years after Clarion West to sell my first short story, and now, another five years after that, I'm juuust to the point where I can sell to the major markets. I sold a chick lit novel to a small LDS press in 2007, but ended up parting ways with them soon after the book came out. I shelved my other chick lit ideas for a couple of years, and then when the indie movement got going, I decided to publish my chick lit that way, since most mainstream publishers aren't interested in chick lit these days.

New Mexico is a great place to write! I first put my novel to paper when I was living in Farmington, encouraged by a good friend (another aspiring writer). Who are some of your influences?

Probably too many to name. Orson Scott Card and Anne McCaffrey introduced me to soft science fiction, which I write a lot of. My Clarion West instructors were invaluable. They were Octavia Butler, Nalo Hopkinson, Bradley Denton, Connie Willis, Ellen Datlow, and Jack Womack. Then there are of course the members of Critical Mass: Daniel Abraham (who also writes as MLN Hanover and James SA Corey), Terry England, Ty Franck (the other half of James SA Corey), Sally Gwylan, George RR Martin, Vic Milan, Melinda Snodgrass, Jan Stirling, S.M. Stirling, Ian Tregillis, Sage Walker, and Walter Jon Williams, among others whom I've surely forgotten to name. They're the ones who picked apart everything I wrote for ten years and told me what it was I did wrong, and I'll always be grateful to them for that. As for who influences my actual style of writing and the stories I tell, I can honestly say that it was getting away from other people's influences that helped me start to sell stories. I find I've got my own way of putting together a narrative, which doesn't necessarily show in the finished product, but is what enables me to do the best work I possibly can.


It's always great when you can find your voice as a writer! I think many of us struggle with that.
Where did you get the idea for this story? What do you think are the most important themes, and what would you like readers to take away after reading the book?

Someone Else's Fairytale got its start when I was reading entertainment headlines and wondering why people care so much about celebrity. I though how if I got hit on by a celebrity, I'd probably laugh, and then I had my idea. The rich guy/poor girl story is an old one, but I thought I'd play it for humor. The love interest, Jason Vanderholt, is mega-famous, like Robert Pattinson or Justin Bieber. Millions of women fantasize about him. My main character, Chloe Winters, just doesn't care, which creates a funny situation. Could you imagine having everyone else's heartthrob show up on your doorstep to spoon feed you ice cream? The theme is, obviously, fairytales, our dreams and fantasies and what is it about them that makes them endure like they do. Even now, in an era of liberated women and no reported dragon sightings for over a hundred years, I think fairytales are relevant, because they were never really about the prince with a palace who could rescue a damsel in distress. What I'd like readers to take away is that, we all need our dreams. Life is pretty bleak without them.


I agree--dreams provide much needed hope for us all. I also enjoy fairytales, and usually choose books that include them in the title or plot (which is why I was originally drawn to your work). What are some other projects you're working on?

Right now I'm working on a science fiction short story. I've sold a couple of these to Analog Science Fiction and Fact, and hope to sell more. They're a great magazine.

I'll be sure to remember that title when I consider submitting short stories! What do you love most about writing? Why?

Getting better at it, I guess. Despite my lifelong love of the craft, I don't feel like I ever had much natural talent, so every word I put on the page is the result of over a decade of hard work, study, and practice. Ten years ago I'd get stuck as I tried to explain a sight or frame some dialogue, and that still happens, but not as often.

Thank you Emily, for sharing your experiences and insight! SOMEONE ELSE'S FAIRYTALE is available on the Kindle, Nook, and through Smashwords. Be sure to check it out!
Posted by The Writer Librarian at 8:57 PM