Last year, I featured UNRAVELING--an awesome YA science fiction thriller by Elizabeth Norris. I'm excited to announce that the sequel, UNBREAKABLE, just came out! I was lucky enough to get an ARC, and from what I've read so far, Liz does a great job of giving just enough detail about the first book to entice readers while moving the story forward. (Very difficult to do.) I can't wait to read the rest! 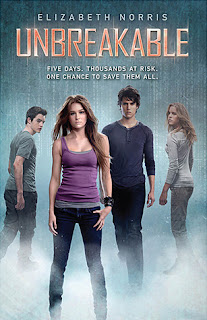 Four months after Ben disappeared through the portal to his home universe, Janelle believes she’ll never see him again. Her world is still devastated, but life is finally starting to resume some kind of normalcy. Until Interverse Agent Taylor Barclay shows up. Somebody from an alternate universe is running a human trafficking ring, kidnapping people and selling them on different Earths—and Ben is the prime suspect. Now his family has been imprisoned and will be executed if Ben doesn’t turn himself over within five days.

And when Janelle learns that someone she cares about—someone from her own world—has become one of the missing, she knows that she has to help Barclay, regardless of the danger. Now Janelle has five days to track down the real culprit. Five days to locate the missing people before they’re lost forever. Five days to reunite with the boy who stole her heart. But as the clues begin to add up, Janelle realizes that she’s in way over her head—and that she may not have known Ben as well as she thought. Can she uncover the truth before everyone she cares about is killed?

Liz was kind enough to answer some questions about writing a sequel, as well as some other stuff:

I love the premise of UNBREAKABLE! Did the idea for the book come before or after UNRAVELING?


When I first began writing Unraveling, I was focused on the first story. I envisioned it as a stand alone. My editor read it, though, and thought there had to be another book. (And she was right, I had a lot of readers who agreed). Luckily, despite the fact that I envisioned it as just one novel, I did have a vague sense of where I imagined Janelle and Ben's story going. I knew I wanted Janelle to get wrapped up in a case that would expand her world and bring her closer to the Interverse Agency. I also knew that I wanted it to tie into one of her father's old cases that's mentioned briefly in Unraveling. From there, it was just a matter of fleshing out the details.


What have been some challenges in writing the second book in a series? Is it difficult to maintain a balance between new and returning readers? Was there anything that surprised you?
Writing the second book definitely presented interesting challenges. Just being so much more immersed in the business aspect of books with Unraveling's journey to publication while also trying to write a new book could be challenging. I had never written to deadlines, which meant I couldn't just write when I was feeling inspired. Sometimes when I sat down to write, I worried that I was just forcing the words to come rather than feeling like I had to get them out. At the same time, I was going back and forth between drafting Unbreakable and editing or doing publicity on Unraveling. Plus, early reviews were coming out, and every rave review was wonderful and also terrifying, because what if my second book was a disappointment? I put a lot of pressure on myself because I really wanted to raise the stakes in Unbreakable and make it even better.

You've definitely done a great job, and I love the book so far. What is it like to keep track of story threads that span over multiple books? Does this affect your editing process in any way?
It definitely has the potential to be tough. I do a lot of brainstorming and outlining, and I take a lot of notes and I referred back to Unraveling or my notes a lot during writing and editing Unbreakable. I'm also indebted to the team at HarperCollins who thankfully caught a few of the inconsistencies that slipped past me. In terms of editing, I really like to do a read through of the novel, out loud, once we've gotten to the last round of edits or even at the copyedit stage. I catch a lot more when I have to read through and say each word out loud.

Definitely a great method! In our last interview, you mentioned the possibility of a YA mystery project. Is that still in development, or are you working on something new?

That's definitely still in development and it's a project I'm definitely excited about. It's not going to be my third book though. In the beginning of this year, I was grabbed by a new idea. I don't want to say too much about it, because I'm not finished, but I brainstormed and outlined, and then wrote about 60k words. I still have more to go, but it's definitely the book of my heart right now.


Sounds awesome! If you were stuck on a desert island, which books would you take with you and why?

I would love to take my iPad if the desert island had wireless, but if that isn't possible, I'd definitely bring Pride & Prejudice, Jellicoe Road by Melina Marchetta, and The Great Gatsby because they're books that I can always read over and over again. I'd also need a few blank journals and a pen!


To purchase a copy of UNRAVELING or UNBREAKABLE, click on one of the links below. Liz is also doing a really fun contest to celebrate the release of UNBREAKABLE. Be sure to check it out!
Posted by Karen McCoy at 9:39 AM

I won an ARC of Unbreakable but it's not heeeere yet. Whine.

Great interview--glad to hear other people have issues with changing tracks from book to book. Not that I'd wish that on anybody, but at least I have company!

Angelica -- you'll love it. Well worth the wait. I'm only a few chapters in, but I'm eating it up like candy.

I've also heard the changing tracks thing is pretty common--and, like you, I'm glad to know I'm not alone!

Thanks for the commments!