THE END GAMES by T. Michael Martin debuts next week on May 7! Hooray! I've pre-ordered it, and can't wait for a copy. I'm also in the final revisions of a paranormal that has shaped itself into a horror, and I want to study good examples in that genre. 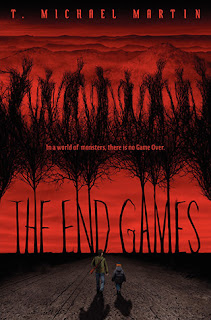 It happened on Halloween.

And a dangerous Game brought it back to life.

Seventeen-year-old Michael and his five-year-old brother, Patrick, have been battling monsters in The Game for weeks.

In the rural mountains of West Virginia, armed with only their rifle and their love for each other, the brothers follow Instructions from the mysterious Game Master. They spend their days searching for survivors, their nights fighting endless hordes of “Bellows”—creatures that roam the dark, roaring for flesh. And at this Game, Michael and Patrick are very good.

But The Game is changing.
The Bellows are evolving.

The Game Master is leading Michael and Patrick to other survivors—survivors who don’t play by the rules.

And the brothers will never be the same.


Here are some questions I asked Mike:

You got your BFA in Filmmaking. How did this lead to writing novels, and can you tell us more about what you learned on the way to publication?

Film is my first love, and I'm totally a child of blockbusters: Movies like E.T., Back to the Future, Jaws, Ghostbusters, and T2 shaped my imagination as much as any novel, and I fell in love with the way those films tell huge stories in a way that still feels emotionally intimate.

I was a Religious Studies major for a year before transferring to film school, and I went to the University of North Carolina School of the Arts with the intention of becoming a director.  About halfway through my first year, though, I realized that I didn't yet have the kind of social confidence a director needs in order to lead an entire crew through a film production's gauntlet.

I switched to screenwriting, and it was right around that time that John Green's and Sara Zarr's first books were coming out.  I was floored and inspired by their work -- I'd never realized what YA could do -- and I started working on a (blessedly unpublished!) first novel.  Fitting my novel work in alongside my class work was hard, but I had incredible and supportive mentors who encouraged me along the way.

I know it sounds strange, but:  I don't think I ever would have become a novelist if I hadn't gone to film school.  I learned 90% of what I know about story structure in screenwriting classes, and the simple act of watching hundreds of films helped me pick up so much about storytelling.  I learned from my mentors to be a merciless editor of my own work, too, because you're really pushed to cut out every unnecessary word in screenplays.

(Also:  I can't tell you how thrilled I've been so many early readers have called THE END GAMES "cinematic.")

It sounds like you gleaned a lot of valuable lessons along your journey! On your website, it says THE END GAMES was inspired by your brother Patrick and your love of zombie movies. What do you like most about the book, and what do you want readers to take away when they're finished reading it?

Definitely my favorite thing about the book is the relationship between the main characters, two brothers named (wait for it...) Michael and Patrick.  Michael is seventeen and Patrick is five, which was a kind of relationship I'd never quite seen in YA, and I really began the book as a kind of love letter to my own younger brother.

I named the characters after us, because even though the fictional "Michael and Patrick" wound up being very different from me and my brother, I wanted to examine the particular kind of protective love I'd always felt for Patrick.  The book has received some wonderful early notices (including a starred review from Booklist), but the thing I'm proudest of is that early readers have said that they found Michael and Patrick's relationship to be convincing and powerful.  For all its spooky action and mystery, THE END GAMES is fundamentally the story of a love between siblings at the end of the world, and more than anything, I hope readers will come away from the book feeling a connection to those two young brothers.

It's so important to capture realistic relationships and ramped up tensions among characters--especially when writing stories with supernatural elements. You've done that very well!
You do a great vlog series on YouTube. What are the benefits you've found from this medium, and do you have any recommendations to writers wanting to start a vlog?

Thank you!  By far the biggest benefit is the wonderful sense of community I've found on YouTube, not just with my fellow vloggers (who are amazing and generous) but also with my viewers.  85% of my audience is made up of teenagers, and it's been a lovely and unexpected blessing to be able to interact with them on a daily basis.  (It's also fantastic to be able to make a video and share it with the Internet after just a few hours, 'cause it takes me, like, 2-4 years to write a book.)

The best advice I can give is to get involved as much as you can with the YouTube community, especially with people who make work you genuinely admire.  Making videos is a blast, but it's also a lot of work, and you really have to love online video in order to stick with it.  It's worth noting that it almost always takes time to build an audience.  (Even John Green had to make 100 videos before he reached 300 subscribers.)

But if you enjoy the process and get involved with your fellow creators, doing a vlog can be an amazingly rewarding journey.

Excellent advice! One of the challenges writers face is how to manage their time. What are some techniques you've found helpful?

I'm currently reading it on my Kindle--and you're right, it's definitely a must! What are some of your current projects? Will THE END GAMES have a sequel?

Right now, I'm working on my next book for Balzer + Bray, due out in Autumn 2014.  It's another YA thriller, and I am so excited about it.  (I can't go into any details -- we're keeping the plot a secret at the moment -- but I will say that it's not a sequel to THE END GAMES and won't have any zombie-ish creatures in it.)

I'm also excited to be working on a new screenplay with a filmmaker whose work I really love, and I'm looking forward to growing my YouTube channel (http://www.youtube.com/tmikemartin).

As for an END GAMES sequel:  I won't say "never," but at least right now, I can't imagine doing another END GAMES book.  Which doesn't mean I don't love it when people ask for one...  :]

Thanks so much for having me, Karen, and for all the awesome questions! And thank you, Mike, for such great answers!

THE END GAMES releases on May 7. You can pre-order it by clicking the button below!

To find out more, go to Mike's website or vlog.

Love it when Glen peeps get together. Awesome interview! Six days and counting and can't wait for the super secret 2014 book, Mike! ;-)

And thank you, Jenn, for stopping by! Makes the Glen reunion even larger. ;)

Whoah, what's with GETTING THINGS DONE lately? I started reading it a few weeks ago too, and . . . I didn't get it read before someone recalled it at the library and I had to return it. How can I get things done if I can't even finish reading the book?? Great interview, you guys! Can't wait to read Mike's book.

Ha, Kimberly! I know exactly what you mean! I'm wondering if the book covers long-term projects with external factors beyond your control (like how the only guy at the bank who can stamp a financial form is gone for the next six weeks!). Thanks for commenting.