I met Erin Lange at a recent conference and bought her books immediately. She has one of the strongest voices I've ever read. Her debut BUTTER just made YALSA's 2013 Teens' Top Ten List and she has a new release entitled DEAD ENDS. 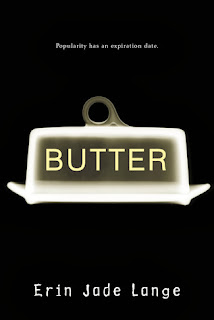 A lonely obese boy everyone calls "Butter" is about to make history. He is going to eat himself to death-live on the Internet-and everyone is invited to watch. When he first makes the announcement online to his classmates, Butter expects pity, insults, and possibly sheer indifference. What he gets are morbid cheerleaders rallying around his deadly plan. Yet as their dark encouragement grows, it begins to feel a lot like popularity. And that feels good. But what happens when Butter reaches his suicide deadline? Can he live with the fallout if he doesn't go through with his plans?

With a deft hand, Lange allows readers to identify with both the bullies and the bullied in this all-consuming look at one teen's battle with himself. 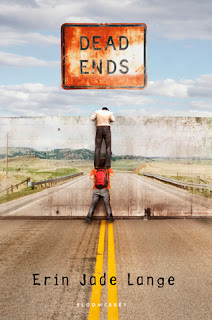 Dane Washington is one suspension away from expulsion. In a high school full of “haves,” being a “have not” makes Dane feel like life is hurtling toward one big dead end. Billy D. spends his high school days in Special Ed and he’s not exactly a “have” himself. The biggest thing Billy’s missing? His dad. Billy is sure the riddles his father left in an atlas are really clues to finding him again and through a bizarre turn of events, he talks Dane into joining him on the search.

A bully and a boy with Down syndrome makes for an unlikely friendship, but together, they work through the clues, leading to unmarked towns and secrets of the past. But they’re all dead ends. Until the final clue . . . and a secret Billy shouldn’t have been keeping.

As a journalist, you get to explore real-world issues. How do you connect this to your writing, and can you tell us more about your journey toward writing fiction?

I spend up to 50 hours every week writing the news. During those hours, I can rarely spare even a second to think about fiction, but I am constantly absorbing. Some stories, like your daily armed robbery, can be brushed off. But some stories can't be so easily purged. They sit and fester somewhere in my subconscious until I have to release them, and they tend to come out in my fiction - accidentally, if I'm being honest. But usually when I have a light bulb moment in my books, I can trace it back my newsroom. It can be as obvious as the internet bullying and teen suicide included in BUTTER or as subtle as the economic recession in DEAD ENDS.

I have always written fiction for fun, but it took ten years of writing facts for me to be truly inspired enough to write fiction professionally.

Further proof that a lot of fiction can be based in fact! I love the character of Butter--he jumps right off the page. How did he come to you, and do you have recommendations to writers having trouble with character development?

Thank you! My stories always start with characters. I've tossed out many a good plot idea because the characters just weren't coming to life, and I've rewritten a good chunk of a book to give my characters a better plot.

Butter's story came to me in a bit of a flash, but in the beginning, he was more of a stereotypical "angry fat kid." Once I started writing him, he let me know he was so much more than that. He was also witty and talented and lonely and loving. I let my characters evolve on the page, and if necessary, I change the story around them. I will always bend a plot to make it more realistic for my characters, but I will never force a character into an unnatural plot situation. I would encourage writers to be flexible with their outlining and plotting and try not make characters do things out of - well, character.

Great strategy. No wonder your characters' voices are so distinct! In DEAD ENDS, you tell the story from the bully's point-of-view. How did the story develop, and what do you want readers to take away when they're finished reading?

DEAD ENDS started with voices in my head. Haha! That is to say, I would get these rushes of dialog that came to mind so fast and furious, I couldn't remember them long enough to get to a computer and type them out. I would actually dictate the dialog into a voice recorder and then transcribe my recordings later. This went on for months, because I had no idea what the story was - only that I had two boys with a lot of personality who were a bit of a mismatched pair. I kept trying to write other things, but these voices just would not go away, so I finally sat down and found them a story. It only took one month to write that first draft, because I loved hanging out with those two!

I always say, I never set out to send a message with any of my books. If a reader walks away with something personal, that is wonderful, but the best I can ask for is that they feel like they've been told a good story.

Indeed! What are some of the current projects you're working on?

I am currently working on my 3rd book, REBEL BULLY GEEK PARIAH, which is due out Fall 2015. I'm aiming for a modern day breakfast club with a side of thrills. As always, I just hope my readers love the characters!

I'm sure we will! Thanks, Erin, for a great interview!

To grab Erin's books for yourself, click on the links below: