Long ago, Angelica was kind enough to critique a novel of mine that wasn't ready for prime-time--and her feedback really showed me where it needed work.

In exchange, I got to read CROW'S REST in its earlier stages, and when I did, I knew it would reach publication one day. That day will come in May 2015, but until then, here's a premise and some pretty cover art to entice you: 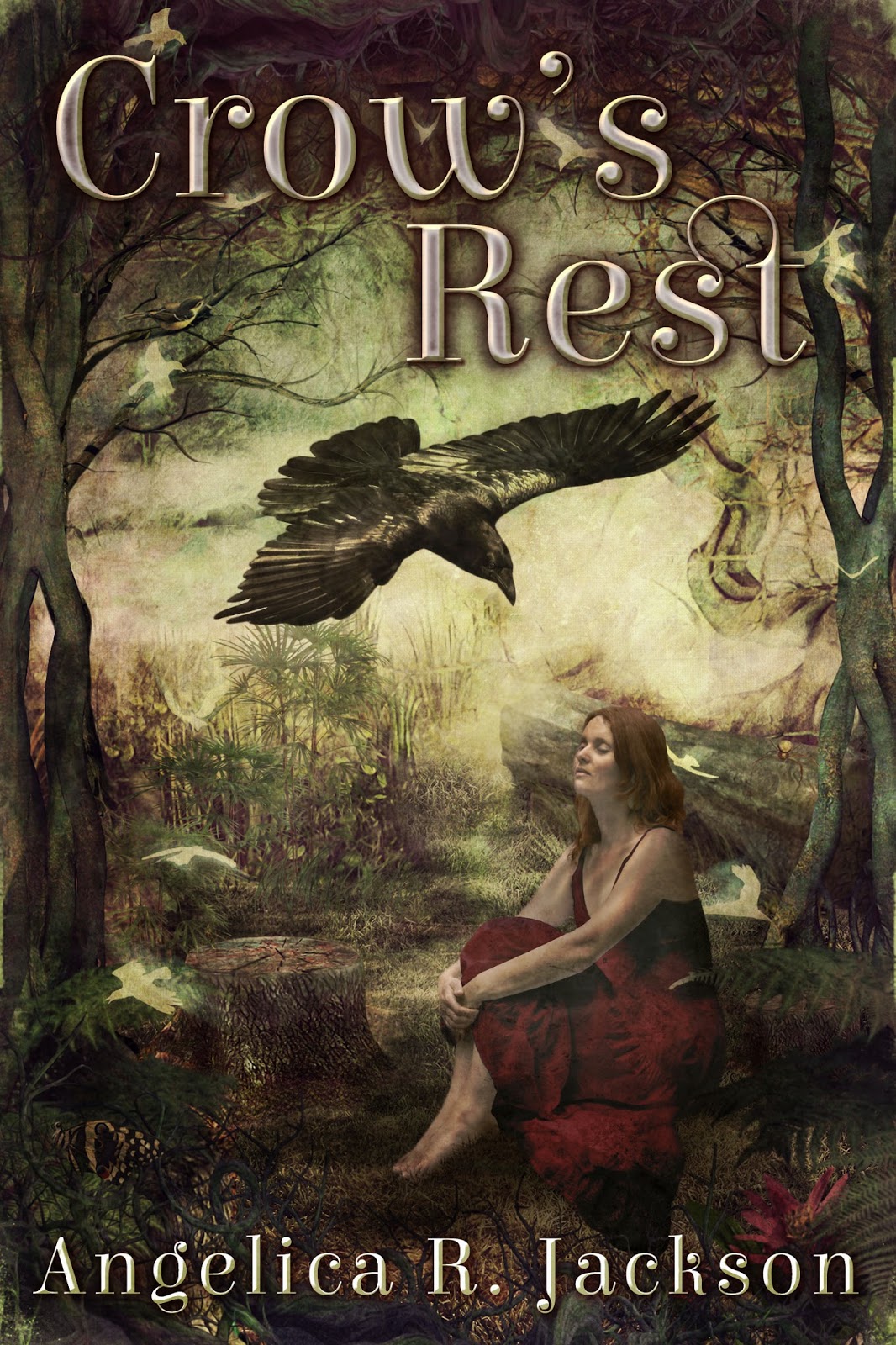 Avery Flynn arrives for a visit at her Uncle Tam's, eager to rekindle her summertime romance with her crush-next-door, Daniel.

But Daniel’s not the sweet, neurotic guy she remembers—and she wonders if this is her Daniel at all. Or if someone—some thing—has taken his place.

Her quest to find the real Daniel—and get him back—plunges Avery into a world of Fae and changelings, where creatures swap bodies like humans change their socks, and magic lives much closer to home than she ever imagined.


Here are Angelica's answers to some interview questions!


According to your bio, you dabble in a lot of creative mediums. What originally drew you to writing, and what about it gives you the most joy?

Hmm, I have to go back pretty far to think what originally drew me to writing—I was nine when I wrote and illustrated my first book for a fifth grade assignment. But even though it was schoolwork, I quickly learned I was onto something fulfilling. I was already an avid reader who had left behind chapter books in favor of novels (sci fi, fantasy, animal stories, and classics like A Wrinkle in Time) and wanted to take part in the storytelling I found in books.

I enjoyed writing from then on, even crafting some stories for the school literary magazine in junior high. Those were an interesting collaboration (battle?) between my partner's determination to write the gritty story of a troubled war veteran—and my enduring belief that every story is better with smart-aleck shapeshifters. In high school, a few other geeky girls and I formed a tight group where we exchanged artwork (mine was heavily of the unicorn variety) and stories (again, unicorns figured prominently—along with werewolves).

But those sharing sessions were where I first became aware that despite me having a very clear story and picture in my head, how I put the words down on the page determined what story and picture the other person actually received. That was a revelation to me—that even words like "tree" and "red" don't mean the same thing to each person.

If I could put on one of those science fiction helmets to let me experience other people's dreams and points of view, I'd likely never take it off. Instead, I'll have to settle for living in my characters' heads.

So I'm going to say that's what gives me the most joy—when I get the words right and I'm able to show what's in my imagination to other people, and yet it's still transformed and complemented by their own vision.

You do it really well! I loved CROW'S REST when I read it, especially the characters. What tips, if any, would you give to writers looking to improve their character development?

Thank you! I wanted all the characters—major or minor—to feel like genuine human beings (or Fae beings). It was originally the Fae who gave me the most trouble because their morality can be so fluid. As a race, they are inherently selfish and narcissistic, so having a Fae character who has become somewhat humanized made me think a lot about how his actions would differ from a less "enlightened" Fae. And how those differences might exhibit themselves in ways that seem contradictory to an observer, but make perfect sense to him and his worldview.

Once I started thinking in those terms, I realized that this doesn't just apply to one Fae character—humans are full of contradictions too. So I would advise spending some time thinking about places where there may be contradictions in the character's own belief system. What lies do they tell themselves to rationalize these breaks from their values? Or are they even aware of them? If another character "calls" them on a seemingly-hypocritical act, how do they react—with soul-searching or blame-shifting? These questions can help you round out your characters in unexpected ways.

I'll have to try that. And I love your book cover! What was the design process like?
Thank you, I love it too! The design process was, in a word, complicated. But you probably won’t let me get away with a one-word answer, so here’s a longer version:
My editor, Owen Dean, and I had talked about what we envisioned for a cover before we even started formal edits. We agreed that we wanted it to have a fantasy feel, with some tension or suspense also in the mix. The first cover mockup we saw was a compelling design but not quite a match for the book.
So I gathered some examples of covers I liked, along with artwork and models on Shutterstock which captured the feel of Crow’s Rest and Avery. We even got permission for me to do a test photoshoot with some models to see if they would be suitable for a custom shoot at Preston Castle (the real-life castle which inspired the setting of my book).
Then I submitted all those images and…waited. It should not be news to any of you, but publishing involves a lot of waiting! But on a day where I needed to feel like I was doing something, I stumbled upon NataliaMuroz’s artwork and the lush, surreal-looking forest with a dark bird flying through it. I was so excited—it was perfect!—that I created a mockup utilizing it as the backdrop for a seated girl.
Well, the higher-ups loved my concept, and for a while it looked like I was going to be able to do the complete design myself. But once I found out about the very tight timeline we were working with (one for me that also included appointments and commitments I couldn’t get out of, copyedits on the way, and work on the sequel that has its own schedule) I had to admit that I wouldn’t be able to come up with a cover we would all be happy with by that deadline. It was a hard lesson in acknowledging my limitations, but I don’t regret it—much better to fess up than cause delays.
Fortunately, I’d been in contact with Kelley York, another author who also has a visual-artist side with X-Potion Designs, and she let me know she could squeeze my cover into her schedule. We worked very closely on getting the main elements right (such as, it turned out the bird in the original backdrop was a vulture and not a crow—but it was only discovered once we downloaded the hi-res version, lol). So I ended up with a cover which I love—and like a new mother I find myself just staring at it, eclipsing the memory of the labor that came before!

What a great learning process--thanks for sharing! Speaking of sequels on their own schedules, what are some of your current projects?

I’m starting to compile video footage and photographs (some from my first-ever visit to Ireland and the UK) to use in the Crow’s Rest book trailer. I’ve already written the music for it, so now all I need to do is find the time to put it all together into a coherent whole. I also have some ambitious plans for a Crow’s Rest book launch at Preston Castle—anybody up for a tour of an abandoned reform school while they wait for me to sign their copy?

The sequel to Crow’s Rest, with the working title No Man’s Land, is coming along and I’m loving the opportunity to get back into Avery’s head. The events page on my website has some upcoming dates, including a spot on a fantasy-writing panel in January that I’m really looking forward to. Joining me on the panel will be some writers who might sound familiar to your blog readers: Jessica Taylor, Heather Marie, and Christina Mercer.

Thanks so much for having me, Karen, and for spreading the cover love for Crow’s Rest! And thank you too, Angelica! *Raises hand for abandoned reform school tour*

Angelica R. Jackson, in keeping with her scattered Gemini nature, has published articles on gardening, natural history, web design, travel, hiking, and local history. Other interests include pets, reading, green living, and cooking for food allergies (the latter not necessarily by choice, but she’s come to terms with it). Ongoing projects include short fiction, poetry, novels, art photography, and children’s picture books.

In 2012, she started Pens for Paws Auction, which features critiques and swag from agents and authors to raise money for a no-kill, cage-free cat sanctuary where she volunteers, Fat Kitty City.

She’s also been involved with capturing the restoration efforts for Preston Castle (formerly the Preston School of Industry) in photographs and can sometimes be found haunting its hallways.

Thanks so much for having me, Karen! And I cracked up when I saw "currently reading Wicked Lovely" in your sidebar--that's one of my comp titles!

I figured it might be when I started reading it! I like your protag better so far, though... :)

Below are the most recommended bitcoin exchangers (BTC for Currency):
Coinbase: $1 min. trade
CoinMama