We Must All Keep Our Lights Burning

Like many, I was shocked and saddened when I heard about Robin Williams' passing. I'd only met him once, and when I did, I was so in awe I barely spoke. And even though he didn't know me from a hole in the wall, I felt like I'd lost a kindred spirit--someone who understood what we all face.

It's even harder for his family, particularly his daughter, who, adding insult to injury, had to deal with these asshats on Twitter. I hope wherever she is, and whatever she's doing, she's able to do what she so eloquently stated here: 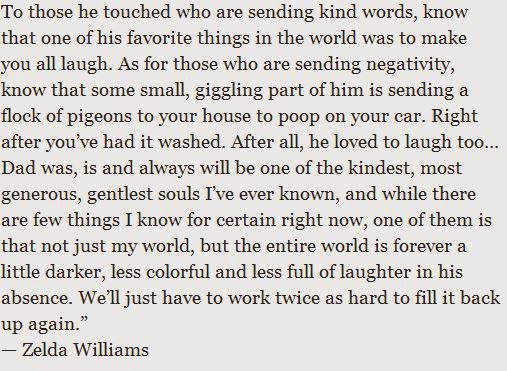 She's right. In the darkness, we have to find the light. Build. Create. Renew.

While I've been knee-deep in edits, I've wrestled with a maddening shroud of darkness that tries to convince me there's no point to it. It's a voice that gets even louder when tragedy occurs. It laughs, and says, "See? Look how awful things are."

But there is a point, in everything we do. If we nurture our own lights within, and shine them brightly on others, we can perhaps keep the brightness burning. Interrupt the sadness, as Russell Brand so eloquently put it.

So that is what I am going to try to do. Find the good, the poignant, the important, and try to share it. And hopefully, in the process, make someone's day a little brighter. It's what all us writers do, whether we know it or not.