I met K.C. Klein through Erin Kellison, who I featured last week. I've also featured K.C. here and here. She has a brand new book out, THE COWBOY ROCK STAR, first in the Somewhere, TX series. Have a look! 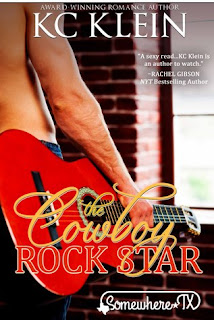 Everyone loves a rock star.
What country legend Brent Kane needs is a good old fashioned hook-up. With pressure to write his next album mounting and the sales from his latest album teetering, Brent needs to find his muse –hot sex with no commitment—fast. So when Brent holes up at his best friend’s ranch in Somewhere Texas to write his next single the last thing he expected was to find his muse in the form of his best friend’s little sister.

DJ Diaz, the nonsense part owner of the Double D Ranch, is not at all affected by Brent’s good looks and play boy charm. She’s fallen once before and learned firsthand the heartache of loving a rock star. But spending time with the man who let her down ten years ago shows her that something’s missing from her life—fun.

But will DJ be able to keep her heart from becoming involved in this “just for fun” relationship? And more importantly, will Brent?

Since our last interview, you've penned THE COWBOY ROCK STAR, part of the Texas Sunrise Box Set. How did the book come about, and what about it was the most fun to write?

This book ended up being life changing for me. A little less than a year ago I connected with a great bunch of indie authors who were interested in doing a box set together. Fast forward numerous ups and downs and curve balls, five of us authors formed a company called the Chick Tales.

The THE ROCK STAR COWBOY has been my funniest book to date. I usually am pretty nervous about writing humor. I think it's one of the hardest things to get across on the page, but the hero in Rock Star, Brent Kane, could be written in no other way. He is pretty full of himself, and yet, at the same time doesn't take himself too seriously. It was really fun writing about some of the crazy situations Brent finds himself in. So even though there are times that the heroine, DJ, may want to choke him, I know the readers will still be rooting for them both to get their happy-ever-after.

I'm sure they will! How did the concept of Somewhere, TX come about, and how is it developing?

Chick Tales published our first box set called TEXAS SUNRISE, in which we created a central town called Somewhere TX. We created all the characters, maps, and timelines for this town and we hope to continue publishing in Somewhere for a long time to come. So yes, THE COWBOY ROCK STAR was life changing for me because from this book, not only did I get great company, but a wonderful group of authors that I now call my friends.

Sounds like lots of benefits all around! Your first book, DARK FUTURE, came out in 2011. What have you learned as a writer in the four years since publication, and is there anything you'd do differently?

Ha! I think the question should be would I do anything the same? I feel like I spent a good portion of the time at the beginning of my career muddled in self-doubt. There was so much time wasted in wondering if I was good enough or wanting to write for the approval of others. I remember thinking that I would live or die by a review left on Amazon or my editor's comments. Not anymore. If people don't like my writing, so be it. If people don't want to read my books, so be it. What I realized is that at the end of the day, I am writing for myself. Which may seem weird since I would love to have millions of fans around the world who love and support my work, but if I am not happy with my book/writing than it doesn't matter what anyone says...I'll never be satisfied. But the flip side of this is true. If I am happy with my work than it doesn't matter what people say because I know that I accomplished the goal of that book and I did it to the best of my ability. In the end, it is my name out there and I have to be proud of my work. Fortunately, when I am happy with a book, readers seem to agree.

I'm so glad you're writing what's true to you, and not caring what others think! What are some of your current projects?

My latest space opera romance, THE SPACE CAPTAIN'S COURTESAN, is out and has gotten some great reviews. It is probably my favorite book to date. The next Somewhere, TX box set, TEXAS STRAIGHT UP, will be out this July and my book, THE BLACKHEARTED COWBOY, will be one of the five full length novels. I'm excited to see what readers think about the second installment in the Somewhere TX series. THE BALCKHEARTED COWBOY is very much in a different vein than ROCK STAR. It explores some darker themes and has some very emotional subject matter. I hope readers will enjoy it as much as they did my first installment.

To grab THE COWBOY ROCK STAR for yourself, feel free to click on the Amazon icon below: