THE BOY WITH 17 SENSES, by Sheila Grau

I had the pleasure of meeting Sheila Grau at this year's NCIBA Fall Discovery Show. Her book is not only intriguing because it takes place on a very interesting planet, but it also reflects a very real condition--synesthesia, which I first learned about when I was helping a Linguistics graduate student with her dissertation research. The book also got a great review from School Library Journal: "Cleverly told, this original take on a classic tale uses an unconventional setting to explore universal emotions. Hand this to fans of whimsical retellings." 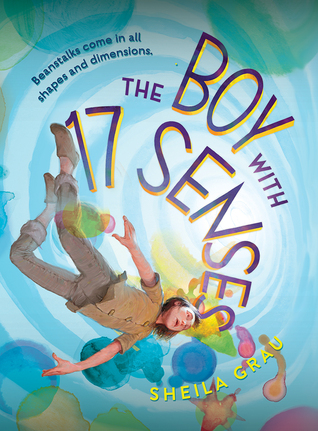 Every resident of the planet Yipsmix has synesthesia—they don’t just hear sounds; they see and taste them, too. On this unusual planet, poor Jaq Rollop must save his family’s farm. To do so, Jaq is forced to sell his beloved pet and only friend. Trusting and na.ve, Jaq gets swindled into trading his pet for a seemingly worthless key. But then something very strange happens. The key leads Jaq through a wormhole to a terrifying and magical land full of riches, overwhelming sensations, and giants. The name of this frightening land? Earth.


According to your website bio, you grew up in an old house that had a secret closet nestled behind bookshelves. Who were some of the authors that you enjoyed reading, and could you tell us more about your journey toward publication?

I remember sitting in that closet with an illustrated copy of The Jungle Book. The idea that a kid could grow up in the jungle, raised by wolves, and have friends like a black panther and a bear, just enthralled me. I loved the fantasy and adventure of that story.

But the truth is, I wasn’t much of a reader as a child. I thought reading was a chore. Sadly, I wasn’t cured of this disability until high school, when we were assigned to read Jack London’s The Sea Wolf. It was such a new experience for me, to actually enjoy a reading assignment.

As a result of this unfortunate upbringing, I missed out on a LOT of fantastic middle grade books. It took having kids of my own to discover them. As a parent, I knew how important it is to encourage a love of reading in children. Not just so they could do better in school, but because it helps kids grow into imaginative, creative, curious and empathetic people. Reading is the key to everything. It opens minds, and doors.

So I read to my kids all the time, and I fell in love with middle grade books. I followed children’s literature blogs for book recommendations, and discovered hundreds of fabulous books. Eventually I decided to try and write one myself. I had no ambitions of publication. My goal was simply to see if I could write a complete story, one with a beginning, middle and end. I did, and it gave me a great feeling of accomplishment, which lasted a few seconds before a new thought crept in: I could do better. So I wrote another one. And another. I read every writing book I could get my hands on. I joined a critique group.

Eventually I worked up the courage to query some agents with one of my stories. And then, a mere 15,000 rejections later (it felt like), I hit the jackpot. Persistence is everything in the publishing game.

Indeed it is! Even though THE BOY WITH 17 SENSES takes place on planet Yipsmix, the planet's inhabitants experience synesthesia, which is a very real condition. What do you want your readers to know about synesthesia, and in what ways, if any, did it shape Jaq's story?

Synesthesia, for those who are unfamiliar, is a neurological condition where people experience more than one sense at a time. While I just hear music, someone with synesthesia might also see music as swishes of color, or taste it, or even feel it as a physical sensation.

I was initially drawn to the creative aspect of synesthesia. I found myself fascinated by the idea that words could have flavor, or that numbers could have personalities. After all, combining unrelated things is what gives us metaphors. Some synesthetic metaphors are so memorable that they’ve become clichés – like when people describe a “loud shirt” – which combines the senses of hearing and sight. Or when Shakespeare described that “bitter cold.”

As for Jaq’s story, I wanted his synesthesia to be a super-power, not a handicap. Since I write for young kids, I thought synesthesia might be a fun way to introduce the concept of neurodiversity, the idea that our brains sometimes work differently from each other. Synesthesia is a neurological condition, but it’s not a disability for most, so there’s no stigma surrounding it. If a brain with synesthesia can exist without the stigma of mental illness, then why not other brain differences, like dyslexia, OCD, anxiety, etc?


Definitely a question worth exploring. Your other series, Dr. Critchlore's School for Minions, was described in School Library Journal as, "...a contemporary fantasy that is a perfect blend of Hogwarts and Monsters University." What was the most fun about writing this series?

So many things! The School for Minions series follows a somewhat gullible kid who goes to a school filled with monsters. The school is in near constant peril, mostly from a rival school, and it’s often up to my main character to save it. There are elements of mystery, humor, and fantasy, which are all things I love. And monsters!

If I had to pick out the most fun thing . . . hmm . . . it’s probably writing the headings for each chapter. I had a lot of fun taking familiar quotations and adapting them to my minion world:

“Give a man a fish, and he eats for a day. Give a man a minion, and the minion will fish for him.”

Or sometimes I use them to expand on the world-building:

“It’s always darkest before the dawn, or if you’re in Fraze Coldheart’s dungeon.”

I love to think of things from a monster’s perspective. For instance, “I left my heart in San Francisco” is a song that might take on a more literal meaning if sung by a skeleton.


Yes, and it would have a great set of lyrics too! What are some of your current projects?

My main focus now is on writing the next book in the School for Minions series. I’m also working on a speculative fiction story with a sibling rivalry component. I like to have more than one work in progress at a time, so if I get stuck on one, I can switch my focus for a bit and then return to the stuck project with a fresh perspective.