This week's feature is an MG fantasy epic that involves journeying between worlds: WINTERLING, by Sarah Prineas. Sarah is also known for THE MAGIC THIEF series. 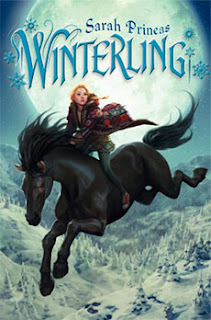 WINTERLING synopsis, from Goodreads: "With her boundless curiosity and wild spirit, Fer has always felt that she doesn’t belong. Not when the forest is calling to her, when the rush of wind through branches feels more real than school or the quiet farms near her house. Then she saves an injured creature—he looks like a boy, but he’s really something else. He knows who Fer truly is, and invites her through the Way, a passage to a strange, dangerous land.

Fer feels an instant attachment to this realm, where magic is real and oaths forge bonds stronger than iron. But a powerful huntress named the Mor rules here, and Fer can sense that the land is perilously out of balance. Fer must unlock the secrets about the parents she never knew and claim her true place before the worlds on both sides of the Way descend into endless winter.

Sarah Prineas captivates in this fantasy-adventure about a girl who must find within herself the power to set right a terrible evil."

Here's the trailer for WINTERLING:

I also interviewed Sarah--here's what she had to say about WINTERLING and writing fantasy novels:

I love the premise of WINTERLING. The Kirkus review of the book said you drew from Celtic and Nordic traditions while writing it. Which traditions were these, and how did they add to your story?

WINTERLING is set partly in our world and partly in a magical world on the other side of a "Way".  In building that other world, I drew on lots of old fairy lore (though the word "fairy" is never used in the book), especially traditions of England, Scotland, Ireland, and Scandinavia for how to deal with fairies.  Here are some of the details I used in WINTERLING: You should never ride on a puck in his horse form, because he'll take you through brambles and buck you off in a lake.  If you turn your clothes inside-out, the fairies won't be able to see you.  A rock with a hole in it can be a seeing-stone--it will show you things as they truly are.

Yet another tradition is that of the Green Man, who becomes more like a goddess in WINTERLING, a Leaf Woman with the power to make the seasons turn.


Those are really unique world-building elements! I saw on your website that you offer free Skype visits to libraries, book groups and classrooms. As a librarian, I think this is a fabulous idea, especially since it's free! What inspired you to offer this service, and have you found it useful?

In the past two years I've done close to 100 Skype visits with classes and book groups, and I've found it to be an incredibly fun way to connect with kid readers.  I so appreciate the teachers and librarians who make the effort to learn what is often a new technology to bring kid readers and writers together.

I was inspired to try it because a friend mentioned a website with info about authors who Skype (http://skypeanauthor.wetpaint.com/).  Last year I participated in World Read Aloud Day and read aloud to nine different classrooms, both in the US and in China.


You used a boy protagonist in THE MAGIC THIEF series, and a girl in WINTERLING. What makes each of these protagonists unique?

Conn was distinctive because of his voice.  He's got a unique way of looking at the world, shaped partly by the fact that he's been alone for years and isn't used to running his ideas by anybody else.  He sees something that needs to be done and he does it--he's a complete pragmatist.  He's also really good at getting himself into trouble.

Fer is very different.  She's not as driven as Conn is, but she has a strong, quiet sense of what is right.  A reviewer described her as "earnest," which sums her up pretty well.  She's determined to help people (Conn, on the other hand, rarely thinks about how his actions might affect others).  She's also deeply connected to nature and wild creatures.


Motivation and voice are great elements to use when building characters. What advice would you give to aspiring writers, particularly those wanting to break into the fantasy/adventure genre?

I'm a big fan of the fantasy author JRR Tolkien, who wrote THE LORD OF THE RINGS.  One of the things he says about fantasy is that the fantasy author doesn't just demand "suspension of disbelief" from his readers, he demands "belief."  And I think that's what the fantasy author has to demand of herself--BELIEF.  You have to believe in your characters and your world.  In doing so, you can create a world that will seem real and believable to your readers.


What other projects are you working on? Will WINTERLING have a sequel?

Last week I turned in a revision to my editor of a companion novel called THE SUMMERKIN.  The plot arc here is about Fer learning to become a true leader, and about her friendship with Rook, which gets pretty fraught because of his loyalty to his brother pucks.

There is also a fourth MAGIC THIEF book on the way.  It's written; I'll be starting revisions soon with my editor.  I don't know yet about publication date, but hopefully it won't be too long.

Thank you, Sarah, for sharing your insight! WINTERLING is on sale now--be sure to pick up a copy!
Posted by The Writer Librarian at 9:32 PM

Hi, i'm SGM, young spanish fan (please, forgive my mistakes) and i want to say that Sarah Prineas has a brilliant mind. Everyone in the world can write books about our world because everyone knows it, but few people could write about fantasy. Everyone with a little imagination can create new worlds or characters, the problem is create them in books, make their alive with words, make the reader see also them, see the fantasy worlds and the magic characters...
But Sarah Prineas did it once, and now she did it another time.
Now i look forward to reading the book: I CAN'T WAIT !
Best wishes to Sarah Prineas =)

You must have read El Ladron Mago in Spanish? Thanks SO much for your comment, and I hope Winterling is magical for you, too.