This week's feature is GILT, by Katherine Longshore. As a long time lover of English history (especially the King's court), I was immediately drawn into the book's premise.
From Goodreads: 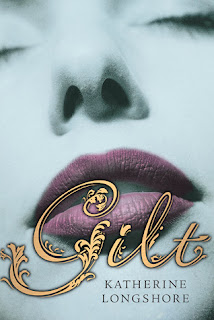 In the court of King Henry VIII, nothing is free—
and love comes at the highest price of all.

When Kitty Tylney’s best friend, Catherine Howard, worms her way into King Henry VIII’s heart and brings Kitty to court, she’s thrust into a world filled with fabulous gowns, sparkling jewels, and elegant parties. No longer stuck in Cat’s shadow, Kitty’s now caught between two men—the object of her affection and the object of her desire. But court is also full of secrets, lies, and sordid affairs, and as Kitty witnesses Cat’s meteoric rise and fall as queen, she must figure out how to keep being a good friend when the price of telling the truth could literally be her head.


Here are some questions I asked Katherine:


According to your website bio, you've traveled quite extensively! How has this influenced your writing and can you tell us more about how writing has enabled you to explore new worlds?

What a great question! In the most obvious of answers, travel has influenced my writing by providing tangible, immediate research for the settings of my novels. I think, however, that the traveling I did when I was younger has provided even better research. Exploring the world brings you into contact not only with extraordinary places but with an incredible variety of people. The characters I create in my fiction are conglomerates of characters I've encountered throughout my life – physical, personality and vocal types – that I mix with a healthy dose of imagination.  I originally wanted to be a travel writer – to stay on my feet for decades – but now that I’ve settled down a little, I love to be able to continue to explore through my writing.  The Tudor court is just like a foreign country – exotic, mysterious, difficult to navigate.  I love being able to visit every day, but am equally happy to be able to come home to my indoor plumbing and chocolate peanut butter cups when I’m done.


What a great way to describe the English court (and those peanut butter cups don't sound bad either!). As a fellow English history buff, I was immediately enthralled by the premise of GILT. Where did the inspiration for the story come from, and what do you want readers to take away when they're finished reading?

The inspiration for GILT came from the history itself. I'd been reading about English royalty for years. When I told my husband that I would like to start writing for young people, he reminded me of the old saying “write what you know”, so I did.  But I wanted the past to be relatable and recognizable to modern readers, so I wrote in a more modern voice and about characters who could be just as visible in modern high schools. I'm a firm believer that people were people no matter when or where they existed, and that 16th century teenagers and their relationships to each other wouldn't be all that different from teenagers today. Friends are important, and so is fun, and there's nothing like first love. The Tudor court just intensifies the consequences.

The Stages on Pages tour (http://www.stagesonpages.com/) was conceived and designed by Stasia Ward Kehoe, author of AUDITION. It's a collective of authors of books for young adults who have their roots firmly embedded in performing arts. There are musicians and actors, singers and dancers, and they live and write all over the country. The tours include a handful of authors, often from the area they're touring, and they discuss how the arts affect their writing. I studied acting and costume design, and I believe that both enable me to write characters more deeply and setting more richly. The northern California tour featured Ms. Kehoe, Gretchen McNeil (author of POSSESS), Elise Allen (author of POPULAZZI) and Kim Culbertson (author of INSTRUCTIONS FOR A BROKEN HEART).  Not only is it always a treat to spend time with other writers, but the tour was a great learning experience for me and (hopefully!) made me a better speaker. The next tour will be in the Midwest in the fall, probably November, and participating authors will be announced on the website soon.


What a fantastic idea--and a great experience. I love your website design--how did you come up with it and how is it maintained? Do you have any recommendations for aspiring writers who want to build an online platform?

Thank you! I don't have to be modest about it, because I didn't build it, so I can say that I love it, too. It was designed by Maddee James of xuni.com, and she maintains it for me, thank goodness. We worked together on the concept and images, the texture of the site, and I think she captured the “feel” of GILT – and my writing – very well.

I think any online platform has to reflect the writer. I'm not a fan of the word “brand” applied to people, but it's effective in this case. You don't want something dark and haunting if you write bubbly picture books, just like I couldn't incorporate pastels and cartoons for GILT. It's the same thing with the rest of your online visibility. Your Facebook, Twitter, blog–all need to reflect who you are as a writer. They can be personal to a certain extent, because people really want to know who you are if they've searched you out. But I think it’s equally important to be personable. Ultimately, you’re in a social situation, even when you’re at your computer in your pajamas at 3 am. Be polite, be funny, be responsive, and have fun with it. But don’t let it take over – the novel (or picture book or magazine article or whatever) comes first.

I completely agree--a memorable brand can really go a long way, but ultimately, it's important to maintain those personal connections. What are some current projects you're working on? Will GILT have a sequel?

GILT does not have a sequel, but it is the first in a three-book series set in the court of Henry VIII. Book 2 begins before Catherine Howard was born, so she won’t have a role to play in it, and neither will Kitty. Book 3 is set somewhere in the middle. All three books feature a different character–a teenage girl–but some familiar characters will show up in every story (like Henry). I'm currently revising Book 2 and drafting Book 3, and having so much fun with them. They are very different stories and show very different facets of Henry and his court, but with all of them I try to write a story that reflects attitudes and situations recognizable and important to teens today.

Thanks, Katherine! To purchase GILT for yourself, click on the button below:

Posted by The Writer Librarian at 12:33 PM

Thank you so much for inviting me, Karen! You ask wonderful questions, and it's always a pleasure meeting another fan of historical fiction!

GILT was a fantastic book, and I can't wait to read what comes next! Touring with Katy was an absolute joy, and I look forward to our next Stages on Pages venture!

@Katherine: It was a pleasure--you gave such great answers!

@Elise: I enjoyed hearing about Stages on Pages--it sounds like a great experience!