ONLY FEAR and AVENGING ANGEL by Anne Marie Becker

This week's author is Anne Marie Becker, who is not only a great writer, but a wonderful person. She writes in a great genre--romantic suspense. Her debut novel, ONLY FEAR, won the RWA Golden Heart, and her book AVENGING ANGEL was released a few weeks ago. 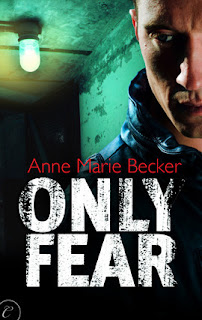 After a violent incident with a patient leaves scars on both her mind and body, psychiatrist Dr. Maggie Levine craves isolation. A radio talk show host seems to be the perfect profession, a job where she can help people from a distance while staying safe. When a strange caller begins stalking her on the air and murdering people to get her attention, Maggie realizes she can no longer close herself off from the outside world.
A personal security expert, former Secret Service Agent Ethan Townsend is no stranger to tracking down the most violent monsters of society and bringing them to justice. Still, it will take all of Ethan's skills to protect his new assignment, the irresistible Maggie, from a man intent on teaching her the ultimate lesson in fear…. 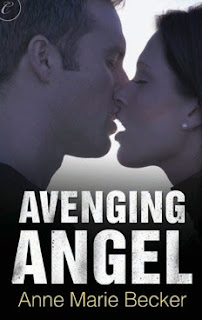 Grains of sand glistened in the moonlight, bright against the backdrop of her wet hair. Her blue lips were parted slightly, as if she could take in that last breath she'd been gasping for. She was, in a word, perfection.

When his friend's niece is murdered, Detective Noah Crandall vows to track down the killer. Since the victim worked in an art gallery with the well-connected and well-heeled Vanessa Knight, Noah questions her first. Despite the chemistry between them, Noah tells himself a relationship would be impossible. He's a loner and their backgrounds are worlds apart.

Drawn to Noah and horrified by the death of her intern, Vanessa shares her insights into the New York City art world. As they work together on the case, she's tempted to explore the possibility of a real relationship with the sexy outsider who ignites her desire. But what Vanessa doesn't realize is that in order to complete his gruesome series of paintings, the killer has targeted her to become his next victim.


Here are some of Anne's answers to my questions:

You finished quite a few novels before getting published. How did this help your writing grow, and can you tell us more about your journey toward publication?

Someone once said you have to write half a million words before you know your voice and have a grasp of the craft of writing. That was certainly true for me. It was my fifth manuscript that sold. It’s been a long, slow journey since I started writing in 2000, but it’s been the right journey for me. In fact, it wasn’t until 2005 that I really got serious about writing and made it a priority despite having two kids under the age of two at the time. That was also about the time I joined Romance Writers of America® and found a local chapter. The support and information there has been invaluable in growing my writing career.

Writers' organizations are so key, not just for the support you mentioned, but also in helping people grow as writers. I'm very glad I joined our chapter!
ONLY FEAR won the RWA Golden Heart for Best Romantic Suspense. Congratulations! What inspired the story and what do you want readers to take away when they're finished reading it?

Thank you! When I started Only Fear, I knew it was more “high concept” than my previous manuscripts, and I had a good feeling about the story. It’s the first in a series –The Mindhunters – and the common factor is SSAM. SSAM (The Society for the Study of the Aberrant Mind) is an agency that employs various experts who hunt criminals and bring them to justice. The acronym also reflects the founder – Damian Manchester – whose daughter Sam was a victim of a serial killer. Having a fictional private agency gives me a lot of leeway in how they pursue criminals, as well as a broader scope of expertise to draw from when I create my strong, intelligent heroes and heroines.
SSAM was inspired by a documentary I happened to catch on TV one afternoon about theVidocq Society. This group of over a hundred professionals, all experts in various fields of criminology, comes together once a month to discuss cases over lunch. The idea enthralled me (I’d love to be a fly on that wall!). So, I invented my own society for aiding law enforcement in hunting criminals and solving the particularly tough cases. As I researched serial killers, I came across JohnDouglas’ books. He was integral to the early years of the Behavioral Sciences Unit (which is now the Behavioral Analysis Unit) for the FBI.
And I should mention that I write romantic suspense, so in addition to the danger and suspense element, my stories always have a happy ending. My themes tend to revolve around love conquering all, and how hope is powerful, strong enough to overcome fear.

Great premise--and I love the parallels between the organization and what happened to the founder's daughter!
In addition to writing full time, you are the current president of NARWA (Northern Arizona Romance Writers of America). How has this helped your writing career and what do you recommend to writers who want to get more involved in writers' associations?

I became president of NARWA in 2009, and my reign ends late this year. I’ve also served in my online chapter (Kiss of Death – which focuses on romantic suspense) as a judge coordinator for their annual contest. Looking back, my career has grown by leaps and bounds since volunteering my time to these organizations.
I absolutely encourage writers to join a well-respected organization. The support and knowledge I’ve gained through Romance Writers of America and its chapters have been invaluable.

I'd have to agree! AVENGING ANGEL, the next book in the "Mindhunters" series, was released this July 30.  What can readers expect from this newest installment?

AVENGING ANGEL follows a secondary character from ONLY FEAR, Detective Noah Crandall. SSAM is, of course, involved in tracking the killer.

I love that you're able to expand on characters you introduced in the first book. What are some other current projects that you're working on? Will there be more books in the "Mindhunters" series?

Yes, I definitely plan to write more Mindhunters books. There are so many employees at SSAM who deserve their happy endings, and I hope to bring closure to Damian Manchester at the end. He’s the man who founded SSAM after his daughter was the victim of a serial killer, a killer who was never brought to justice. I’m finishing book three, currently titled DEADLY BONDS.
I’m also developing a different series and hope to complete the first book early in the new year.
I’ve always got ideas popping up, usually at the most inconvenient times when I’m on deadline for a different project. I’d like to write a screenplay someday, and I’ve got 30,000 words of a contemporary romance (no suspense) that’s part of a four-book series. I certainly have a lot of ideas and not enough time, but that’s part of the fun of being a writer —I’m never bored.

Thanks, Anne! To get your own copies of ONLY FEAR and AVENGING ANGEL, be sure to click the buttons below:

Posted by The Writer Librarian at 5:42 PM

Great interview and great job on sticking with your dream, Anne Marie! Congratulations!

Thanks, Alexa! I appreciate you stopping by. :)