I met K.M. Rice after an exquisite panel where she spoke about publishing. Check out her book, DARKLING, as well as her contribution to the upcoming book, MIDDLE EARTH: FROM SCRIPT TO SCREEN, set to debut this fall. 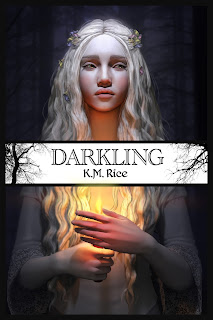 How far would you go to save your family?

Midsummer used to be a day of feasts and bonfires. A day when cares were set aside for the joy of grass between our toes, warm hands in our palms, laughter in our hearts. Our celebrations dimmed with the light. Something upset the balance of our woods. Something so deep that even our bonfires can't lure the sun back. And he has something to do with it. Of that we're sure, which is why I'm being given to him.

DARKLING is K.M. Rice's suspenseful debut novel about a young woman's sacrifice to save her village and the unexpected strength that comes from first love. 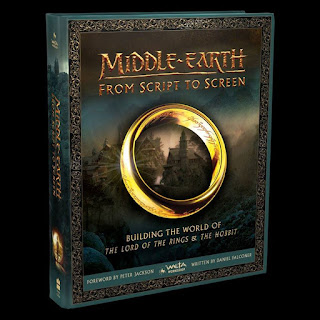 For the first time ever, the epic, in-depth story of the creation of one of the most famous fantasy worlds ever imagined--an illustrious compendium that reveals the breathtaking craftsmanship, artistry, and technology behind the magical Middle-earth of the blockbuster film franchises, The Lord of the Rings Motion Picture Trilogy and The Hobbit Trilogy, directed by Peter Jackson.

Richly illustrated with thousands of film frames, concept art and behind-the-scenes imagery, many previously unseen, Middle-earth: From Script to Screen follows in the footsteps of the Fellowship of the Ring and the Company of Thorin Oakenshield, visiting the realms and landscapes of Middle-earth and uncovering their secrets. Accompanying this stunning gallery, cast and crew reflect upon their experiences, share brand-new stories and insights into how the wildernesses and soundstages of New Zealand were transformed into a magical world of hobbits, Dwarves and Elves, resulting in one of the most spectacular achievements in cinematic history.

With foreword by Sir Peter Jackson and additional writing by K.M. Rice; illustrated with final film imagery, behind-the-scenes pictures and conceptual artwork, including places not seen in the final films, this monumental compilation offers unique and far-reaching insights into the creation of the world we know and love as Middle-earth. 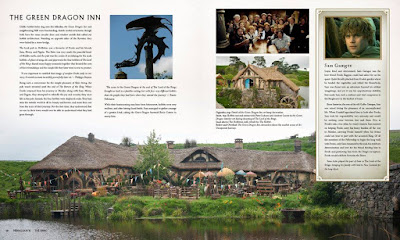 In addition to writing, you have also been involved with TheOneRing.net. What has this experience meant to you?

TheOneRing.net has enriched my life in so many different ways. I started off as a fan, obsessively checking the site for updates once the Hobbit films were announced. For a lot of us, TheOneRing has been the resourced for Tolkien-related news for years. An opportunity arose to help out the staff at San Diego Comic Con (a nerd’s dream come true, right?!) so my little sister, Alex, and I leapt at the opportunity and are so happy that we did. It was such a joy to be surrounded by other Middle-earth fans, and we quickly found a way to contribute to the site and officially become staff by launching our very own webseries called Happy Hobbit. You can find the show on YouTube, and each episode strives to bring Middle-earth into your daily life. 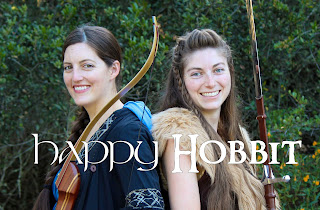 Happy Hobbit has made me a very happy hobbit! Other than the joy of connecting with other fans around the world, our little show caught the attention of Sir Peter Jackson in the summer of 2013. He shared a video of us reacting to the trailer for The Hobbit: The Desolation of Smaug on his social media, then filmed his cast reacting to our reaction! That not only made Happy Hobbit go viral and appear in international news, but it also made us recognizable to the cast and crew.

As such, TheOneRing asked us to be press on the black carpet for the Hollywood premieres of The Desolation of Smaug and The Battle of the Five Armies. We even got to meet our namesakes, Fili and Kili, for that is what we’re called in Happy Hobbit. It truly was a Middle-earth fan’s dream come true. 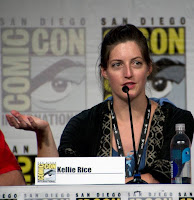 But amazing as it was to a part of the action on those memorable nights, the greatest reward from TheOneRing.net and Happy Hobbit has been the incredible friendships we have made along the way, and getting the opportunities to go on adventures with my sister, who is my other half, and our mom, who loves to travel and tag along! In about two years, I went from someone who had always wanted to go to a convention to being on a panel at San Diego Comic Con!

Breathtaking! Your first novel, DARKLING, explores the connections between people and nature. How did this story come to you, and what do you hope readers take away from it?

That’s a very astute observation. I don’t immediately think of Darkling as focusing on the relationship between people and nature, but of course, that is the crux of the plot.

Darkling was actually the third book I had ever written, and the main story came to me in a dream that most would consider to be a nightmare. I was the main character, Willow, and the emotions and setting felt so vivid that the dream lingered with me long after. I write in a rather manic manner. Once a fancy takes ahold of me, it is difficult for me to stop. I don’t outline, so I often think that I am writing quickly because I am entertaining myself with the story as I skip along!

Though the dream lingered in my mind, I didn’t have a world for it until an eerie piece of music unlocked some sort of door in my subconscious, and the words then vomited onto the page, for lack of a better description. “The woods are dark” was typed onto a blank page, and within twenty days, I had my third novel. I also actually only wrote on 15 of those days, so this is why I used the gross idea of retching up words. When they come, they come!

I hope that readers can, firstly, forgive me for being so gross up above! But in all fairness, Darkling can get quite gross at times. I have a friend who teaches it to his college students as an example of Gothic literature, but it is an odd mixture: part Gothic, part Victorian, Dark Fantasy, with a healthy dose of Romance and Feminism. I am somewhat allergic to writing damsels in any form.

So I hope that my readers are not only entertained, but inspired. While the story is fast-paced, the subtext is about recovering from loss, which is something we have all been through in some form. I have looked into the darkness. I have felt its all-encompassing pull. I have heard the whispers that tell me to give in to fear and to push people away for fear of being hurt. Darkling is about traversing this grief and stepping out on the other side, all the stronger for it. I hope that readers can vicariously experience this change through the story and that it may bolster their own radiance.

Life isn’t about the goodbyes. It is about the hellos.

It is indeed. You are also crowdfunding an effort to turn DARKLING into an audiobook. How did this come about? 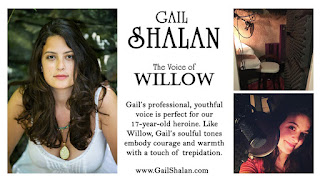 Some time ago, I was approached by the voice artist Gail Shalan. She had come across Darkling and thought it was the perfect material for her, and after she sent me a sample of her reading the first chapter, I couldn’t agree more! Gail is incredibly talented and has the warm, youthful tones needed to convey the heart and soul of Willow.

This project needed to happen, but since I am an independent author, I would have to pay Gail out of pocket, which I simply couldn’t afford to do. She and I kicked around various ideas and eventually settled on crowdfunding to raise the money. It was tempting to just slap something up online and hope that people would start chucking money at us, but we both knew that would not be the case. So we waited, and I brainstormed.

I spent the end of 2015 working in Wellington, NZ., at Weta Workshop. Weta is the special effects and props company that helped bring to life Lord of the Rings, The Hobbit, Narnia, and many other beloved films. In fact, I was there assisting author Daniel Falconer by doing additional writing and research on a brand new book out this fall called Middle-earth: From Script to Screen, which is available now for pre-order. Helping him write this book goes back to your first question: my geek life and my professional life came full circle! While working on this epic of a book, I started chatting with my friends there about my crowdfund, asking if any of them would be willing to donate an art piece for me to use. After all, these are Oscar-winning concept artists! 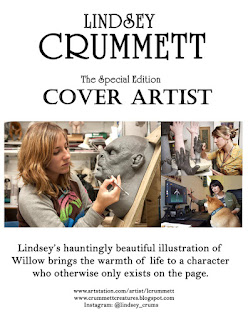 Lindsey Crummett, who I have had the pleasure of knowing for a few years now, had read Darkling when it first came out. Loving a good ghost story, she offered to make me an illustration. Nearly two years later, here we are! Lindsey was a concept designer on both The Hobbit and Avatar, and her illustration of Willow is now available through my crowdfund as both an art print and as the cover for the limited edition. Gail and I really would not have been able to do this without Lindsey’s generosity, kindness, and incredible talent, so we are so very thankful.

Wonderful! What are some of your current projects?

I’ve already mentioned Middle-earth: From Script to Screen, but it bears being mentioned again.

I also set out to write new content for the limited edition of Darkling and got carried away. What was meant to be a short story accidentally birthed a novel (you should always use protection when writing short stories or else this may happen to you!). This new book is a companion piece to Darkling and is called The Watcher. I’m really excited for Darkling fans to sink their teeth into it, for it provides much more depth to the story and I have been asked to write more in that world ever since Darkling’s release in 2013.

My true book child, however, is a four-book series called Afterworld. All the books have been finished for some time, but Afterworld Book 1: Ophelia is a bit late out the gate because I am fulfilling the demands of my friends who read it and making sure that I give any interested publishers a chance to have a look at the manuscript before I launch the series by publishing it independently. I am happy to wait so that I can put my best foot forward, however, I am very much chomping at the bit. Readers often ask me for updates on its release and as I said, the Afterworld books are truly my “book children.” I have invested so much in the characters and the story. I am as delighted as I am terrified to let these children out into the world.

I also have my author vlog which I film somewhat regularly, so if you feel the need for some writing advice, please check it out on YouTube.

To keep up with my upcoming releases and news, I always encourage people to not only follow me on social media, but to also subscribe to my monthly newsletter, Wildling Adventures. I call my readers and community “wildlings” because we all have the wildish nature to create inside. We just have to unleash it. Overall, that is what I hope my stories can do for people: unleash their wildish nature. 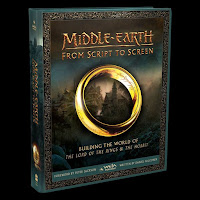