TRUE STORIES AT THE SMOKY VIEW by Jill McCroskey Coupe

When I found out that TRUE STORIES AT THE SMOKY VIEW was about a librarian, by a librarian, I had to feature it. It also earned a Gold Medal from the Independent Publisher Book Awards this year. Have a look: 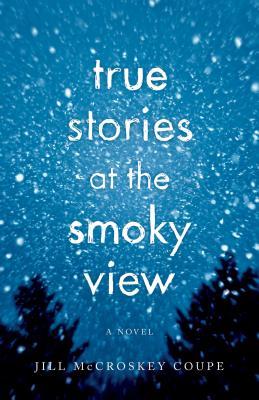 Although Vrai (short for Vraiment), an art history librarian in Baltimore, has not spoken to her friend Skip for over a year, after his sudden death she dutifully takes his ashes and his dog home to his mother in Knoxville, Tennessee. Vrai has no idea why Skip stepped into traffic in Baltimore with his hands over his eyes, or why he so abruptly ended their longtime friendship.

After Skip’s funeral, Vrai rescues ten-year-old Jonathan, who has been abandoned in the funeral home parking lot. The Blizzard of 1993 soon strands this unlikely duo at the Smoky View Motel, where Jonathan, whose parents were assassinated by Pinochet’s henchmen, comes across short stories (fiction) hinting at the truth about Skip’s death.

By the end of this story of mutual rescue, the lives of Vrai and Jonathan have been changed forever.


While a librarian at Johns Hopkins University, you earned an MFA in Fiction from Warren Wilson College. What led you to pursue writing, and what do you love most about it?

I have always wanted to write, and when I was considering going to graduate school, I was torn between a graduate degree in psychology (my undergraduate major) and an MFA in fiction. I discovered that the MLS program at the University of Maryland would allow me, on a small scale, to do both. I could apply credits earned in other university departments toward a very practical degree in library science. Feeling as though I’d won the jackpot, I received an MLS which included two creative writing classes and three graduate psychology courses.

During my thirteen years at Johns Hopkins, which was my third library job after receiving my MLS, I served as library liaison for the Psychology Department and also for The Writing Seminars. I kept writing fiction, which is, for me, a way to try to make sense of this crazy world we inhabit. Encouraged by some of The Writing Seminars faculty, I applied to Warren Wilson’s low-residency MFA Program, which would allow me to continue working full-time.

Writing is definitely a great way to make sense of our crazy world. TRUE STORIES AT THE SMOKY VIEW has been praised for its great characters and storytelling. What about the book are you most proud of and why?

I began writing the novel when my life was in turmoil. This is not an approach I would recommend. I had almost all my characters from the very beginning, but it took me a while – years, in fact – to discover what their story was. At one point I put the novel aside and wrote another one, which I took to a workshop taught by John Dufresne at the Taos Summer Writers’ Conference. Feedback I received there and elsewhere was invaluable when I finally returned to the first novel. So I suppose I’m proudest of having learned to be a little more patient in my writing. Turmoil can be a good source of ideas, but it’s best to wait till the dust has settled before forging ahead.

I’m also proud of, and a little amazed by, the way some of the characters in the novel developed. Rupert Brill, chair of the Art History department at the university where my protagonist Vrai (short for Vraiment) is the art history librarian, was at first nothing more than a seemingly apt name for an arrogant professor. But Dr. Brill surprised me by emerging as a complex human being with good moral instincts, and he played a crucial role in a climactic scene toward the end. What would I ever have done without him?

Jonathan Santiago, the young boy whose parents were assassinated by Pinochet’s henchmen, also came to life in surprising ways. Friends have asked me if Jonathan is based on my son. He is not. When I think of Jonathan, I see someone very different; he’s completely fictional but also very real to me.

The best characters are. You are currently published with She Writes Press. How did you know this was the right publisher for you?

Having joined She Writes, a huge online community of women writers, I began keeping an eye on its publishing arm, She Writes Press. Soon after Library Journal, Booklist, and Publishers Weekly agreed to begin publishing reviews of She Writes Press books, the press and She Writes merged with SparkPoint Studio. This was around the time I finished revising True Stories at the Smoky View and began looking for a publisher. As a former librarian, I knew I wanted the opportunity to have my book in libraries nationwide. So I submitted my novel to She Writes Press, and here I am with reviews in both Library Journal and Booklist and, as of May 30, a Gold Medal from the Independent Publisher Book Awards.

Wonderful! What are some of your current projects?

I’m working on a “novel in stories” about an interracial friendship which begins in the segregated South and continues for over fifty years. Although the Taos Summer Writers’ Conference recently ceased to exist, John Dufresne, bless his heart, is holding his workshop in Taos this summer as usual. So I’ll receive feedback on my manuscript from him and from the five other workshop participants, three of whom were also in the workshop at which True Stories at the Smoky View was discussed.

A week or so ago, I surprised myself by starting work on something brand new. I already have a brief outline and possibly even a title. It’s too soon to know whether or not this will turn into a full-length novel. I’m reminding myself not to rush – to allow the story to develop on its own. Here’s hoping I can take my own advice.


This post can also be viewed here.
Posted by Karen McCoy at 11:41 AM