TO THE STARS THROUGH DIFFICULTIES by Romalyn Tilghman 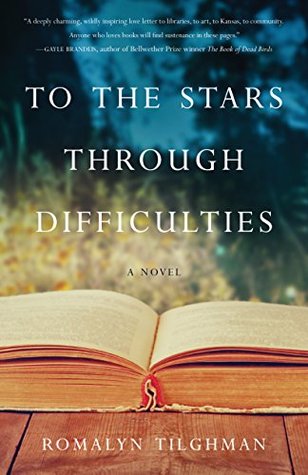 Andrew Carnegie funded fifty-nine public libraries in Kansas in the early 20th century but it was frontier women who organized waffle suppers, minstrel shows, and women's baseball games to buy books to fill them.

Now, a century later, Angelina returns to her father's hometown of New Hope to complete her dissertation on the Carnegie libraries, just as Traci and Gayle arrive in town - Traci as an artist-in-residence at the renovated Carnegie Arts Center and Gayle as a refugee whose neighboring town, Prairie Hill, has just been destroyed by a tornado.

The discovery of an old journal inspires the women to create a library and arts center as the first act of rebuilding Prairie Hill after the tornado. As they work together to raise money for the center, Traci reveals her enormous heart, Angelina discovers that problem-solving is more valuable than her PhD, and Gayle demonstrates that courage is not about waiting out a storm but building a future.

Can you tell us more about your time with the National Endowment for the Arts? In what ways do you feel the arts benefit people in their daily lives?

My time with the National Endowment for the Arts was beyond fabulous, maybe the best job that ever existed. I served as a liaison between the chairman's office and the field. First, I was based in the Midwest, serving a region from Minnesota to Texas; then I moved West to serve on the Pacific Rim, including Hawaii and Alaska as well as California, Washington, and Oregon. I spent my life meeting regional artists and those supporting them. I made frequent trips to DC, sat in on discipline panel and National Council meetings with some of the most extraordinary, committed, and articulate artists in the world.

Behind the glamour was hard work and a wicked travel schedule as we tried to figure out how to stretch limited federal dollars to do the most good. (The NEA has never cost the individual taxpayer more than the price of a postage stamp.) One of the things its critics don't realize is that the NEA is about ACCESS to the arts as much as it is about creation. Throughout this country, you'll see artists in schools, murals in neighborhoods, new plays being produced in small theaters, thanks to the NEA. Fifty years from now, I think the NEA will be lauded for the support it gave to diverse voices of a variety of ethnicity, geography, and sexual preferences, further defining the essence of our great country. Its work has permeated our rural towns and inner city neighborhoods, stretching our imaginations. A life without music or dance or literature or a photograph of beauty is a drab life indeed.

Indeed it is. What great work you've done to spread creativity. You also have a long history with and love of Carnegie libraries. What was your process of building the story of TO THE STARS THROUGH DIFFICULTIES around these libraries?

I grew up in the Carnegie library in Manhattan, KS. I started going before I learned to read and kept going until I graduated from high school. When I started working for the Association of Community Arts Councils of Kansas, I noticed Carnegie libraries sprinkled across the state, some of them being converted into arts centers. Early on, I began to see similarities between the (mostly) women I was working with and the pioneer women who'd taken the initiative to get a library into their towns. For over 30 years, I kept notes on the two eras, not sure how I would use them, but knowing the story would be of the women, their efforts, and their discovery of their own power and self-esteem in the process. Because the libraries were central, I needed Angelina, a library science PhD candidate, to provide a lot of facts. Because I wanted to show the re-purposing as an arts center, I developed Traci, the artist-in-residence. And because I wanted the issues to be as immediate as possible, I created a tornado survivor who had to start from scratch and prioritize.

The way these three characters connect definitely makes for an uplifting story. If there was anything you could tell your former writer self, what would it be and why?

Not to be afraid. Does every writer say that? I don't regret the fulfilling career I have had, and I'm not sorry I tore up my homework and withdrew from my freshman creative writing class, because I would have missed many adventures between then and now. I have no illusions that my life would have been more glamorous or fulfilling had I spent it writing, because I know how hard the work is.  But I find myself trying to remember all the truisms I've preached to artists all these years. "Anything worth doing never should've been attempted in the first place." "The hardest time isn't when you're doing the work, nor when you've adjusted your marketing, but when you've done everything right, and the payoff hasn't come. Persistence is what separates artists from the 'wannabes'."

Very true! What are some of your current projects?

My life is full of promoting the book right now. I want to stay focused enough to help it find its place in the world and to create book events that encourage people to read my book and to take their own actions in their communities. That said, I'm getting such positive reinforcement, my brain continues to play around with ideas for the next book, which may very well feature some of the same characters.

This post can also be viewed here.
Posted by Karen McCoy at 9:11 AM